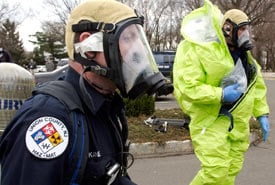 Today we’re releasing a three-part series about how the U.S. has dealt with the bioterrorism threat during the Bush administration. Our reporting, done in collaboration with Reader’s Digest and multimedia magazine FLYP Media, found that the $48 billion the government has spent fighting bioterrorism over the past seven years might actually have accelerated the risk of an attack while making only modest progress in preparing for one.

Earlier this week, a bipartisan commission found that a biological terrorist attack is likely somewhere in the world within the next five years. Like the congressionally mandated commission, ProPublica found that major changes are necessary in the nation’s approach to containing the threat of bioterrorism.

Experts told ProPublica that the government must find ways to make us safer from bioterrorism without accelerating risk. Insiders also told us the government needs to weigh the full range of microbial threats facing the country, whether they are posed by nature, accident or terrorism.

Check out the entire ProPublica series.