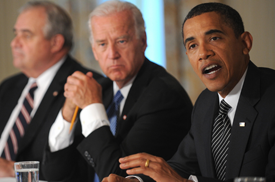 When President Obama introduced the stimulus plan, he made a bold promise of transparency: “Every American will be able to see how and where we spend taxpayer dollars by going to a new Web site called Recovery.gov.” But like so many noble ideas in government, that may be easier said than done.

The government is moving to make detailed information on the stimulus publicly available. Congress has created an independent agency, led by a respected former inspector general, to collect information from those getting the money and to post it, starting in October. However, interviews by ProPublica suggest differing opinions among key officials over whose job it is to make sure the information is reported correctly. Meanwhile, government watchdogs point to errors that plagued a similar transparency effort last year, and note that companies or organizations that mistakenly misreport how they spend the money face no penalties for doing so — or incentives for getting the numbers right.

All of which raises the question: If the information isn’t accurate, what is the value of transparency?

“It seems like everybody on down the line is counting on the guy below them to get it right,” said Craig Jennings, a policy analyst at OMB Watch, a nonprofit organization that focuses on government accountability.

The Office of Management and Budget (PDF) says getting the data right is a shared responsibility between itself and the Recovery Accountability and Transparency Board, the new agency created to build Recovery.gov and post information there. But the board says its hands were tied by Congress, which didn’t give it either the resources or the responsibility to make sure the data coming in is accurate.

The man leading the stimulus transparency campaign is Earl Devaney, a burly former Secret Service agent who served as inspector general at the Department of the Interior from 1999 until early this year. (In May, ProPublica gave Devaney its Investigative Governance Prize for his report (PDF) on the department’s Mineral Management Service.) In February, President Obama tapped him to be chairman of the Recovery Board, which is made up of current federal inspectors general.

Nobody suggests that Devaney’s job is easy. The board is responsible for gathering and posting information from each recipient of federal stimulus money — everything from highway contractors and public housing authorities to school districts and state agencies, and whose number Devaney estimates as at least 200,000 and as many as 900,000. Those recipients are required to report 44 separate pieces of information (PDF), from basic data like federal registration numbers and congressional districts, to descriptions of their projects, project status, and the number and descriptions of jobs that have been created or retained. To build a site that can handle that information, the government is paying a company called Smartronix as much as $18 million. (See our earlier story about the government’s refusal to make the contract itself transparent, citing concerns over privacy and proprietary information.)

The information that stimulus recipients give Recovery.gov is deeply important to the administration, and not only because the president promised the make the stimulus transparent. That information will also provide the Obama administration ammunition with which to fight critics—especially those who question the number of jobs the stimulus has created.

However, the federal government’s last attempt at collecting and posting spending data suggests that accuracy is the Achilles’ heel of such efforts. In December 2007, the government launched USAspending.gov, a site intended to track the flow of money awarded in federal grants and contracts. According to the OMB, in 2008, submissions to the site had an error rate as high as 51 percent (PDF), falling to 13 percent by last April — a year and a half after the site was launched.

Stan Czerwinski, a director at the Government Accountability Office, says the problems with USAspending.gov should be a warning signal for Recovery.gov.

“The weakness in USAspending.gov to this day has been data quality,” Czerwinski said. “Why would you assume that suddenly because we’re standing up a Recovery.gov, which has a similar concept, but with a lot more flowing through it, to a lot more participants, in a lot tighter time frame, that you’re not going to have those same problems?”

The OMB said it has learned important lessons from USAspending.gov, including the importance of using standard reporting forms that can be compared automatically. However, questions have already been raised about the current version of Recovery.gov, which posts stimulus spending as reported by various federal agencies. (The updated version, which Smartronix is building and which is designed to post spending information from recipients, is scheduled to be introduced later this month.)

In June, ProPublica reported that according to Recovery.gov, the Department of Agriculture had allocated just $610 million, but paid out $1.68 billion. On another page, the site claimed the department had provided funding notifications of $362 million — less than a quarter of what Recovery.gov reported had been paid out. The next month, ProPublica reported again on a difference between Social Security Administration spending posted on Recovery.gov and what was posted on the SSA’s own site.

Asked about the discrepancies, Ed Pound, the communications director for the Recovery Board, said at the time that it wasn’t up to the board to make sure the numbers were right. “We’re not in the business of verifying the data,” he said.

The board intends to apply that same initial hands-off approach to verifying the data it gets from recipients in October. In an interview with ProPublica, Devaney said the board doesn’t have the mandate, or the manpower, to make sure the numbers it gets from stimulus recipients is accurate.

“The division of labor, as I view it, is that we’re in charge of the Web site, and that OMB is in charge of the data requirements, and the data quality,” he said. “And if OMB didn’t jump up and say ‘It’s me’ in your interview, then something was missed.”

Referring to the American Recovery and Reinvestment Act, which authorized the stimulus and created the board, he said, “Nowhere in there does it say that I’m responsible for data.”

The OMB takes a slightly different view. “The accuracy of the data is a shared responsibility,” said Rob Nabors, the OMB’s deputy director, in an interview. “I fully expect that as part of the audit responsibilities that the Recovery Board undertakes, there will be discussions, reviews, surveys, to make sure that, if not that the data is absolutely correct, that the information that is provided to the federal government is at least as accurate as possible.”

Nabors played down the difference between his and Devaney’s interpretations of each agency’s role. However, Danielle Brian, the executive director of the Project on Government Oversight, an independent watchdog group, said the responsibility of ensuring the accuracy of the data should be more focused. “When you start seeing people sharing responsibility, that’s cause for concern,” she said.

The Recovery Board and OMB agree on one point: Verifying the accuracy of the data that ends up on Recovery.gov will be difficult, whoever’s in charge of doing it. Both agencies said they intended to use software programs that look for outliers in the data — numbers so far from the norm that they demand closer attention.

“If you created five jobs, not 5 million jobs, we’ll probably be able to piece that together,” Nabors said. “But to the extent that you’re asking, did they really create 17 jobs or did they create 13 jobs … we’re going to be very reluctant to change data, except with the clearest evidence that the data inputted was actually incorrect.”

Nabors said that for the moment, there are no standard penalties for recipients that unintentionally make errors in the reports they send to Recovery.gov, beyond whatever conditions may be imposed by individual agencies. Jennings, the policy analyst at OMB Watch, said that’s a mistake.

“This reporting takes time and effort,” he said. “Without the extra pressure to make sure that it’s right, there’s no reason [for recipients] to make sure that it will be.” He says that OMB could insert clauses in stimulus contracts that dock recipients some small fraction of their funds if they report bad data. Conversely, the OMB could offer small bonuses to recipients whose reports are error-free.

“If we expect transparency,” Jennings said, “it makes sense to apply that pressure.”

The federal government’s approach to stimulus data has also sparked concern at the GAO, where one official compared it to Wikipedia, the open-source encyclopedia.

“OMB seems to be taking a little bit of a hands-off approach in terms of, ‘Let’s see what comes in, how it works,’” the official said. “The more transparency that you have, the more light you can shine on the data, and that will improve its quality.”

He continued, “That’s a very untraditional approach for reporting, and so a lot of people are uncomfortable with that, inside and outside of the government.”

Jennings said he hopes Devaney, who won wide praise for his tenacity as inspector general at the Department of the Interior, will fight for more responsibility and resources to make sure the data on Recovery.gov is correct.