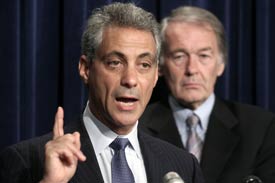 Last week, we noted that Rahm Emanuel’s brief but profitable stint as an investment banker highlights the revolving door swinging between Washington and Wall Street. Two stories in particular, one from the Chicago Tribune in 2003 and the other from Fortune Magazine in 2006, have detailed Emanuel’s days as a banker, which earned him more than $18 million in less than three years.

Politico points out that Exelon is in the midst of trying to buy another company, which could create "the nation’s largest power company." From Politico: