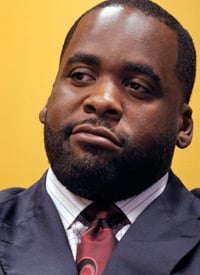 The Detroit Free Press is reporting that Mayor Kwame Kilpatrick has struck a plea deal with prosecutors and will step down.

What's not exactly clear yet are the terms: Kilpatrick's case is complicated, involving the perjury and obstruction of justice case brought by city prosecutors and the assault case brought by state prosecutors. But from recent reports about the plea negotiations, it seems likely that Kilpatrick will in fact do jail time. We'll have more in a bit.

The deal calls for Kilpatrick to plead guilty to two felony counts of obstruction of justice by committing perjury, agreeing to serve four months in jail, pay up to $1 million in restitution, and serve five years' probation. He also agreed not to run for office during that five-year span.

The deal accounts for both the city and state case and calls for Kilpatrick to step down later this month.