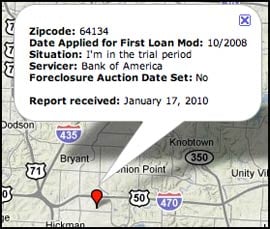 Valentine’s Day may have already passed, but we’re not letting that stop us from matching people up! Yesterday, we rolled out our home loan modification matchmaker, which partners homeowners having difficulties obtaining a loan modification with local journalists who can share their stories, investigate the problems they’re having with the program and maybe even prompt some resolution. In the past 24 hours, we’ve had 100 reporters sign up and we just finished matching half of them with one or more homeowners. If you’re participating in the project, you’ll meet your match tomorrow morning.

So far, journalists from The Wall Street Journal, Chicago Tribune, Baltimore Sun, Philadelphia Inquirer, New York Daily News, Village Voice, Hartford Courant, Star-Ledger in Newark, Detroit Free Press, Seattle Times, Colorado Public Radio and NBC’s "Today Show" have joined the project. And journalism students from U.C. Berkeley, New York University and City University of New York have joined as well. Thirteen journalists from California will soon get their matches by e-mail. And seven of the 16 journalists from New York who signed up got matches (don’t worry New Yorkers, we’ll find people for the rest of you). We still have a few homeowners in Indiana, Nevada, Kentucky and Montana on the lookout for journalists.

One reason we created the home loan modification matchmaker was because we’ve seen these stories have impact. Deb Franklin, the homeowner who had been in loan mod limbo the longest, told us on the ProPublica Podcast how the York Daily Record followed up on our report about her and within a week Chase approved her for a modification. And Alexandra Andrews noted last year, "we wrote about Ian and Megan Bearce of Glendale, Calif., who had been asking Bank of America for a loan modification for months. They finally got one on Sept. 8, but Megan says they began making progress only after ProPublica got involved and Bank of America plucked them out of the obscurity of the home retention department." There are several more examples and your story could be one of them.

These stories can make a difference while shedding light on how the loan modification program is working. Help us spread the word! We hope you’ll look through our loan modification section, sign up with the matchmaker (journalists here – homeowners here) and then contact the mortgage servicer to report on the loan mod status. Then share those stories with us.