Former presidential candidate Rep. Duncan Hunter (R-CA) has never been shy about his passion for hunting. But he found himself the object of some friendly ribbing in yesterdayâs Washington Post for his most recent hunting plan: Hunter recently wrote the U.S. Embassy in Chad saying he planned to take a hunting safari there -- part of an effort, he explained, to save refugees. 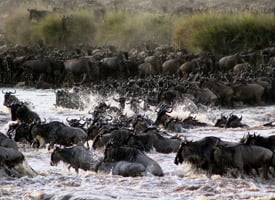 Hunter wrote that he would begin his trip to Chad with an expedition to hunt wildebeest, after which he would cure the meat and distribute it to hungry Sudanese refugees living in Chad. The State Department issued a tepid response to Hunterâs request. Among the problems it pointed out: "Wildebeest are not present in Chad."

Despite the State Departmentâs assurance that he would be more than welcome to assist in a more typically scheduled aid distribution, Hunter scrapped his trip and is now looking into Kenya or Tanzania, which have fewer Sudanese refugees than Chad, but far more wildebeest.

Hunter has something of a history of creative hunting projects.

Hunter represents Californiaâs 52nd District, which covers part of San Diego County and lies inland from Channel Islands National Park. The park is crisscrossed with endemic wildlife, such as the endangered island fox. But those species have been under threat for years from a non-native deer population, which the National Park Service had planned to eradicate until 2005, when Duncan Hunter stepped in.

Hunter, who was chairman of the House Armed Services Committee at the time, included language in the 2006 defense bill that would have allowed the Channel Islandâs second largest island, Santa Rosa, to be used as a private game preserve available to disabled veterans and guests of the Pentagon.

When criticism of the policy arose, Hunterâs spokesman told the Los Angeles Times, "This is disappointing news, when considering this proposal was solely intended to benefit our nation's wounded and disabled service personnel." The problem was interested disabled vets, much like the wildebeest, were nowhere to be found. Paralyzed Veterans of America declared the plan "not viable" after visiting Santa Rosa and concluding the mountainous terrain wouldnât work for hunters in wheelchairs.

Hunterâs Santa Rosa plan, which his press secretary, Joe Kasper, told us "reflected Congressman Hunterâs passion for the outdoors and his interest in supporting our wounded vets," was finally reversed in the 2008 Defense Authorization bill, ending veterans' chances to have what Kasper called "the experience of a lifetime."

As for Hunterâs short-circuited Chadian adventure, Kasper said, "Hunting game that could be distributed to refugees -- if allowed -- would be one part of the privately funded trip." He added, "At this point, nothing has been finalized."