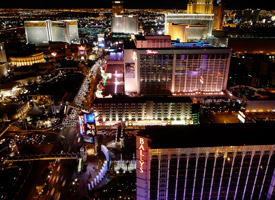 Remember when Louisiana Gov. Bobby Jindal mocked the stimulus package by saying it included a levitation train from Las Vegas to Disneyland? The Democrats were quick to rebut Republican criticism. But it looks like Senate Majority Leader Harry Reid, D-Nev., might get a train line after all. The U.S. Department of Transportation announced late Thursday that Las Vegas is now included in the California high-speed rail corridor (PDF), making the Sin City train a strong contender for stimulus funding. After the stimulus passed, Republicans accused Reid of trying to steer money to his home state when, during final closed-door negotiations, funding for high-speed rail jumped from $2.25 billion to $8 billion. It still remains unclear if the Las Vegas train will benefit from stimulus funding. Reid dismissed the magnetic levitation concept Thursday and backed the privately funded DesertXpress project, whose officials say they have "no interest in tapping the stimulus money." The deadline for initial applications for high-speed rail funding from the stimulus is Friday.

The Federal Highway Administration revoked $1 million in stimulus funding from a road project in Washington state after an investigation revealed that the county road engineer had owned property near the road and profited from selling the county right of way, The Daily World of Aberdeen, Wash., reports.

The Republicans have released a tongue-in-cheek video a bloodhound named Ellie Mae sniffing for stimulus jobs. In truth, it wouldn't have been hard for the GOP to find people hired for stimulus projects. The Obama administration has issued a press release virtually every time someone has gotten a job.

Vice President Biden refueled the fiery debate over the stimulus when he acknowledged yesterday on ABC News' "This Week" that the administration 'misread' the economy when preparing the American Recovery and Reinvestment Act. The vice president also said that "no one expected that that recovery package would in fact be in a position at this point of having distributed the bulk of the money."

Since the Recovery Act became official, Secretary of Transportation Ray LaHood, a prominent Republican member in a largely Democratic Cabinet, became a sort of traveling stimulus salesman. CQ Politics points out that last week LaHood traveled to Denver, where he helped break ground on a road and bike path, then hit up Portland, Ore., Oakland, Calif., and Nevada. LaHood's behavior is reportedly rankling his fellow Republicans.

Call a spade a spade. That's an easy rule to apply, right? Chadwick Matlin over at The Big Money wades through the semantic challenges of reporting on the stimulus. According to Matlin, references to the "stimulus act" defy President Obama while references to the "Recovery Act" side with him.

Some, like conservative columnist Michelle Malkin, call them "tax-subsidized re-election billboards." Others refer to them by their function -- road signs advertising the American Recovery and Reinvestment Act that are placed near stimulus-funded construction. The signs, which the AP estimates cost roughly $500 to $1,200 to design, make and install, are becoming a bit of a punching bag for critics of the stimulus. The administration claims the signs "promote transparency" while others see them as frivolous political waste.

Texas squeaked by the deadline to submit applications for its piece of $48 billion in state fiscal stabilization funds last Wednesday with only 18 minutes to spare. Most of that money (81.8 percent) is earmarked for public schools, and the rest can be used flexibly to avoid cuts to public services like police and fire. Now some Texas officials are nervous, wondering whether their application will pass muster because it includes "a funding increase that requires teacher raises" reports the Fort Worth Star-Telegram. Additionally, some Texas legislators contend that some of the federal fiscal stabilization stimulus money is being used simply to supplant state funds. This is allowed, but Education Secretary Arne Duncan has warned states that they could jeopardize their chance at $5 billion in future stimulus money for education if they pull the state funding rug out from under schools.

The looming bankruptcy of the federal highway trust fund has been causing transportation officials to fret. The AP reports that the fund is "expected to go broke by August 21 due to declines in gas and truck sales tax revenue because of the recession." If that happens, officials and contractors warn, it could erase progress made by the stimulus. The Patriot-News of Harrisburg, Pa., cites a large contractor that, despite hiring back laid-off employees and picking up 30 more after winning several stimulus contracts, won't beef up operations significantly because there are too many "unknowns."