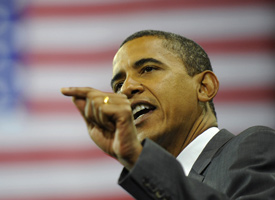 "Doodad Pro" in Nunda, N.Y. is apparently a big fan of Barack Obama. So enthusiastic, in fact, that when he/she contributed thousands of dollars to the campaign, he/she provided "Loving" as his/her employer and "You" for a profession.

The same goes for "Good Will" in Austin, Texas. Mr. or Mrs. Good Will also works for "Loving" as a "You."

Together, the two donated more than $27,000 to the Obama campaign in hundreds of small donations (usually $25). Thatâs far above the $2,300 per-person federal limit.

Those two donors feature prominently in a complaint filed by the Republican National Committee today with the Federal Election Commission. The RNC wants an audit of the Obama campaign, arguing that donations like these show the campaign has "knowingly accepted excessive contributions" and indicate "a wide-scale problem," RNC Chief Counsel Sean Cairncross said in a statement. The complaint also focuses on the Obama campaign's acceptance of donations from foreign sources, $33,000 from two Palestinian brothers in particular who'd bought T-shirts from the campaign's Web site. (We will post a copy of the complaint as soon as it's available.)

The Obama campaign did not immediately return a call requesting comment, but an Obama spokesman told the New York Times, "We constantly review our donors for any issues" and "we will continue to review our fundraising procedures to ensure that we are taking every available step to root out improper contributions."

Just who is behind the Good Will and Doodad Pro donations is a mystery for now. Good Will listed an Austin, Texas address shared by the Austin nonprofit Goodwill Industries. An employee told Newsweek that she had "no clue" who'd given the money. And as for Doodad Pro, there used to be a Doodad's Boutique at the address given in Nunda, N.Y., but that store closed about a year ago, Newsweek found. The contributions were highlighted in a Newsmax article last week.

Excessive contributions to campaigns are "fairly common," said FEC spokeswoman Mary Brandenberger, who added that the commission sends warning letters to campaigns about such donations "all the time." One such letter recently went to the McCain campaign.

But what is not common is for donors to give apparently false names. That's a "potential crime," Jan Baran, a Republican lawyer and expert on campaign finance law, told ProPublica. "Clearly there's enough here that warrants the FEC looking into what actually occurred."

In filing the complaint, the RNC also hopes to draw attention to Obama's legions of small donors, whose contributions remain undisclosed. Federal campaign finance laws do not require the campaigns to disclose donors who give less than a total of $200 in donations. About $220 million of the $450 million raised by the Obama campaign comes from donors who never give more than $200. John McCain's campaign, by contrast, provides an online database of all contributors.