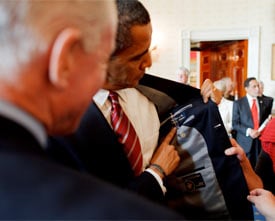 President Obama’s upcoming forum on jobs and economic growth is the subject of speculation. The White House says the forum, which is to be held next month at the White House and involve business leaders, economists and financial experts, is not a discussion about a second stimulus package. Not everyone is convinced: Reuters columnist James Pethokoukis writes that the summit, "is likely a table setter for Obama to announce Stimulus 2.0" at his State of the Union address in January. Pethokoukis estimates the size, duration and components of the future stimulus bill, which he says Harry Reid is "already cooking up" in the Senate.

Meanwhile, The Hill reports that labor unions are looking at a new bill as a way to revive programs cut from the first stimulus package. The provisions being sought reportedly include "more fiscal aid for state and local governments and more spending on infrastructure," and $10 billion for school construction and other projects removed from the earlier bill.

Finally, a survey by Deloitte finds that nearly half of business executives it surveyed expect the stimulus to have an impact on the economy in 2010. That’s the good news. Here’s the bad: Only a third of those surveyed think the stimulus has helped the economy so far, and half think it should have injected money into the system more quickly. Moreover, fully 71 percent said the plan should have been smaller; at the same time, though, 51 percent said the United States was somewhat or very likely to need more stimulus in the next year or two. And two-thirds said they did not believe that anti-fraud provisions in the plan would actually prevent fraud.