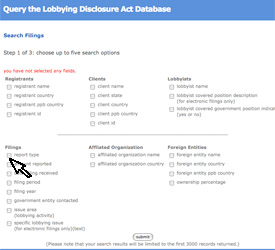 Given that the American Recovery and Reinvestment Act (aka the stimulus) is the biggest spending bill in U.S. history, we at ProPublica have been trying to follow the stimulus money. And so have thousands of lobbyists. Over 2,500 associations, cities, counties and corporations have already shelled out for lobbyists to talk stimulus with the feds.

Each lobbyist is required to file a quarterly report giving their name, their client's name, the amount of money the client paid and the issues or bills they lobbied over. First quarter reports were due April 20, and subsequent quarterly filings roll in by the 20th days of July, October and January.

So far, the first quarter reports have generated minimal news coverage, perhaps because the scant details in the reports "almost raise more questions than they answer," according to Sheila Krumholz, executive director of the nonpartisan Center for Responsive Politics. The disclosures do suggest that certain stimulus measures, like carbon-cutting, have caused a lobbying frenzy, but the details of any particular company's pitch is anyone's guess.

For a peek at who's doing stimulus lobbying, what they're interested in (if you're lucky), and how much they're getting paid, try your hand at searching the Senate lobbying disclosure database. Here are some simple instructions: