U.S. Sens. Dick Durbin and Tammy Duckworth of Illinois are questioning whether the Department of Housing and Urban Development followed federal law in deciding to shutter two public housing complexes in the tiny village of Thebes in southern Illinois, forcing 85 residents to leave.

In a letter sent last week to HUD Secretary Ben Carson, the Democratic senators called the forthcoming closure “an ill-advised and heedless decision” and requested copies of various documents, public notices and a written relocation plan for Thebes’ public housing residents. Durbin and Duckworth say these documents are required by law when housing authorities attempt to sell or demolish public housing complexes.

HUD told Thebes’ public housing residents on Feb. 7 that they would soon have to move out of the Mary Alice Meadows and Sunset Terrace apartment complexes because the local housing authority lacks the funds to fix them. Around a fourth of the roughly 400 residents of Thebes live in the two developments.

The residents now find themselves in the same state of uncertainty as families in nearby Cairo who received similar news from HUD officials a year ago. Last week, The Southern Illinoisan and ProPublica profiled six residents and described how HUD’s actions in Cairo and Thebes have upended their lives. 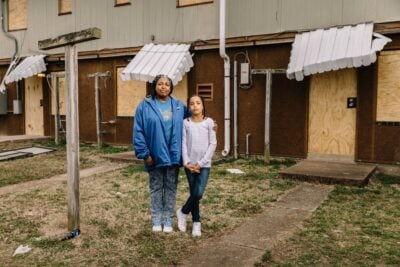 In Small-Town America, the Public Housing Crisis Nobody’s Talking About

The shuttering of public housing complexes in two small Midwestern towns raises big questions for residents, HUD and Congress. To tell the story, I could use your help.

Like public housing residents in Cairo, those in Thebes are eligible to relocate to another public housing complex or receive a voucher that subsidizes rent in the private market. HUD is also paying moving expenses.

HUD generally does not manage public housing complexes directly, instead relying on local housing authorities to do that. But HUD took over the Alexander County Housing Authority in early 2016, citing allegations of mismanagement, misspending of federal funds and unsafe building conditions. Both Thebes and Cairo are located in the county.

Brown has said the decision to move residents rather than renovate the complexes was based on a September assessment by a private architectural firm showing it would cost close to $650,000 to repair 10 vacant units in the two properties. Problems included moisture damage, plumbing leaks and sagging upstairs floors in the two-story units. Residents also have complained of mold, holes in their interior walls, broken windows and security issues at the premises. The housing authority lacks the funds to bring the units up to acceptable standards, he said.

Under the law and HUD’s rules, housing authorities are required to use a prescribed formula that considers the cost of needed repairs versus that of new construction to determine whether demolishing or disposing of a property is appropriate.

The senators’ letter asks HUD whether there has been an official “determination of obsolescence” of Mary Alice Meadows and Sunset Terrace.

A document previously provided to The Southern Illinoisan by Brown listed a variety of options that the county housing authority considered for addressing the Thebes properties, and the pros and cons of each.

Under the demolition option, the cons included that the site “may not meet obsolescence test for approval” and that, even if it does, there is no funding source identified to complete the demolition.

However, in March, HUD issued new guidance that would make it easier for housing authorities to demolish or otherwise dispose of troubled public housing projects. The Alexander County Housing Authority has so far been unable to find private developers interested in purchasing the complexes.

Thebes Village President Steve Mathis said HUD did not consult with village leaders prior to telling residents in February that they have to move. He said he would like to see the complexes kept open, but the village does not have the funds to purchase them. “It’s going to hurt,” he said.

Mathis said one of his major concerns is that HUD will move residents and leave a vacant property that could attract squatters, vandals and drug abusers. “We’re just going to have problems down there,” said Mathis, who also is an Alexander County sheriff’s deputy.

The senators have asked for a response to their letter by Thursday.