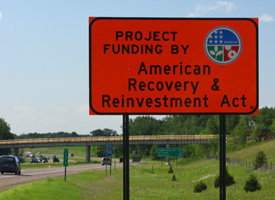 The St. Petersburg Times' PolitiFact found that President Obama may have overstated the tax relief provided by the stimulus, which he claimed was $43 billion on July 11. Obama based his claim in part on a calculation from the Treasury Department, which found that a change to the Alternative Minimum Tax would save Americans $8 billion; but PolitiFact points out that the congressional tax committee estimated that the same change would save Americans just $2 billion.

Consumer groups have sent a letter to Larry Strickling, the administrator of the National Telecommunications and Information Administration, protesting the way the first batch of stimulus money for broadband is being distributed, according to the Web site GigaOM. The groups say the money is focused on areas that have no broadband service at all and excludes areas where existing service is slow or expensive. Four billion dollars has been set aside for broadband spending under the bill.

A Utah Department of Transportation official acknowledged that the department's claim that the stimulus has created 6,000 transportation jobs in the state is inflated, according to The Salt Lake Tribune. Transportation Commissioner Kent Millington said that 6,000 is the number of jobs that were supposed to be created under a formula used by the Federal Highway Administration. In reality, he said, 6,000 is a "dangerous assumption," because it includes jobs both created and saved, as well as jobs that have been counted twice.

The federal government has given Arizona part of its stimulus money ahead of schedule, The Arizona Republic reports. According to the paper, federal officials decided to give the state $61 million in State Fiscal Stabilization Funds now, rather than in the fall as originally planned, due to the fiscal crisis facing the state. Gov. Jan Brewer has not yet said how she plans to use the money.

Are you tracking the stimulus? ProPublica has set up a mailing list for reporters covering the stimulus, and you're welcome to join. Stimulus tracking is all the rage these days, as demonstrated by this report from Pennsylvania's WHYY. You can also help us by signing up for the Stimulus Spot Check, our latest ProPublica Reporting Network initiative.