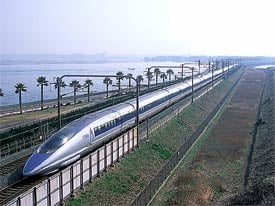 Slow down, high-speed rail seekers. In the race for stimulus money, the Obama administration has received applications from 24 states requesting $50 billion for high-speed rail projects, reports The New York Times. That’s more than six times the amount of money designated. Joseph Szabo, head of the Federal Railroad Administration, told the Times that the selections will be merit based, and will be made this winter.

The Salt Lake Tribune reports that Utah Sen. Bob Bennett is involved in a fickle love affair with stimulus money. Two days before the Republican senator voted against the nearly $800 billion package – which he said would only stimulate the national debt – Bennett wrote to Energy Secretary Steven Chu asking him to pay special attention to a few projects in Utah. He wasn’t alone, reports the Tribune. All four of Utah’s Republicans in Congress voted against the bill, before using congressional stationery to try to nab a portion of the stimulus package for their state.

Tax credits for companies that create jobs? Increasingly, economists and Washington officials are saying "Yes, please," reports The New York Times. The federal government hasn’t tried it since the 1970s, but in the face of the highest unemployment rates in a generation, supporters are saying it may offer just enough incentive to get companies to hire new workers.

And finally, The Wall Street Journal reports that more than $270 million of stimulus money awarded by the Federal Aviation Administration has gone to low-priority projects. In fact, they are of such low priority, they fall below the threshold of projects that the FAA would typically weed out. We’ve reported on the FAA’s decision to fund low-priority projects with stimulus money, and on the inspector general’s blasting of the FAA for its stimulus-spending decisions.