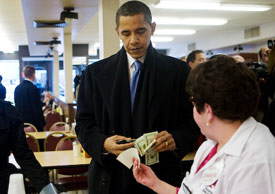 On the strength of vague assurances that the second half of the $700 billion will be managed better than the first half, President-elect Barack Obama seems to be cruising towards having the money in hand for his administration next week.

Until today, the Obama team’s pitch to release the funds had been short on specifics. But this afternoon,  Rep. Barney Frank (D-MA) announced that the Obama team had assured him it would spend between $40 billion and $100 billion of the bailout money on foreclosure relief for homeowners.

Beyond that, it seems Obama won’t spell out just what his administration will do with the money. Sen. Chris Dodd (D-CT), head of the Senate banking committee, said yesterday that he no longer expected a detailed proposal – the details will come via hearings in the Senate. That "makes more sense than, with 72 hours, trying to fashion something in great detail between now and then before a vote," he said. Not all senior Senate Dems seem to be on board with that, though: Sen. Carl Levin (D-MI) said yesterday that he still expected at least some details put in writing. There’s been no sign those are forthcoming.

Meanwhile, Obama reportedly reminded Senate Democrats yesterday that his quest is still tilted in his favor: As we pointed out yesterday, even if Congress were to deny the funds, Obama could veto. Congress could override, but it would take a supermajority in both houses. That seems all but impossible, making it a "fait accompli," as Sen. Jim Inhofe (R-OK) put it.

The first vote on the Republicans’ bid to block the release of the funds could come as early as tomorrow in the Senate, reports Roll Call. We’ll keep you updated.