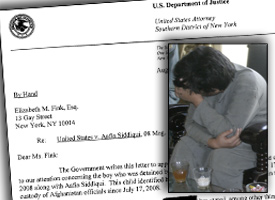 What happens when an 11-year-old U.S. citizen is held by Afghanistan's intelligence service? According to the U.S. State Department, not much, at least for now.

It is, for sure, a complicated case. Early this week, we noted a Washington Post article detailing confirmation that Afghan security forces had been holding Ahmed Siddiqui, the 11-year-old son of suspected al-Qaida sympathizer Aafia Siddiqui, and said we'd make some calls.

Well, we've made contact, but the State Department couldn't give too much information and "can't go into theoreticals." A State Department official from the Bureau of South and Central Asian Affairs told ProPublica that the department is "working to confirm the child's identity and citizenship."

"The child is in custody and in the care of Afghan authorities," the official said. "The United States never assumed custody of the boy. As part of our effort to confirm the identity and citizenship of the child, the consular official from our embassy in Kabul are initiating a consular visit to check on the child and his welfare."

The official, who declined to give his or her name, was unaware of when the meeting would take place and did not want to take a guess about what could be the next step.

"Before we go into a theoretical 'what happens,' we should probably wait and see what the status is," the official said. "First, we need to confirm and find out, and then we will take the next step."

A letter (PDF) sent Friday by the U.S. Attorney's Office of the Southern District of New York to one of Siddiqui's lawyers said that a boy held by the Afghan police had DNA that was "consistent with that of a potential offspring of Aafia Siddiqui." He is a U.S. citizen.

According to Human Rights Watch, the boy's age bars him from consideration of criminal responsibility under both Afghan and international law regardless of his citizenship.

"Under Afghan and international law, Ahmed Siddiqui is too young to be treated as a criminal suspect," said Joanne Mariner, terrorism and counterterrorism program director at Human Rights Watch. "He should never have been transferred to the custody of Afghanistan's abusive intelligence agency." After being detained by Afghan police, he was transferred to the country's intelligence agency, the Post reported.

We also contacted several other international law experts as well as Afghan government officials for their perspective on the matter. We'll let you know what they say.