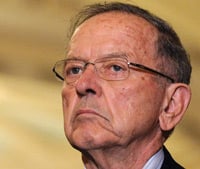 We’ve been keeping you updated on the ongoing Alaska election, where voters mysteriously stayed home and Sen. Ted Stevens (R-AK) defied predictions to come out ahead by nearly 3,300 after the first count, raising questions about protocol for felonious senators.

The Alaska Division of Elections warned us that the votes were still trickling in and told us to hold on tight until the final count was in. Well, last night officials posted the first update since the election.

Stevens now trails Anchorage mayor Mark Begich by 814 votes in the senatorial race. The final votes won’t be counted until November 19, but the Alaska pollsters (whose predictions were way off the first time) are back to calling the race for Begich.

And what about the missing voters? The total number of votes is now up to 282,996, which is still much lower than the 313,592 who voted in the 2004 presidential election. But it’s getting closer.

That doesn’t mean the questions are over. If the Stevens-Begich race remains this close, there will be a mandatory vote recount.