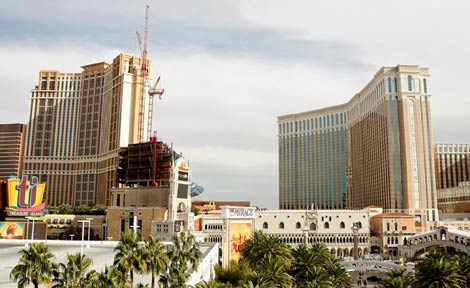 Most economists seem to agree that the stimulus is working, but that’s little comfort to Ralph Marano.

Marano is the director of operations at the Silver Nugget, which like other casinos in Las Vegas has been hit hard by the recession. He says fewer people are moving to the city, and more are leaving to look for jobs elsewhere; meanwhile, those who stay are slower to open their wallets. The local unemployment rate rose half a point to 13.3 percent in July, and building permits are down more than 70 percent over the year before.

Marano said he sees the impact of those changes in the people who visit his casino. "In August, we saw a significant contraction in customer counts and willingness to spend," he said. "There doesn’t seem to be an end in sight."

Last week, Vice President Joe Biden marked the 200-day point of the stimulus with a speech highlighting its successes. But that rosy view seems at odds with reports from the ground, as evidenced by the latest information from the Federal Reserve, showing a more mixed picture over all. And the latest installment of StimCities, our informal running survey of economic conditions in eight cities, shows that tangible signs of recovery are still hard to find.

Jeff Graham, a nonprofit director in Atlanta, said an increasing number of his organization’s monthly donors can’t meet their pledges because they’ve been laid off. Dave Sena said the shelter he runs in Grand Forks, N.D., had more than 100 people in it for five days in a row last month, peaking at 109—"which is a record for a summer month," he said. Martin Poole, the business agent for Atlanta Carpenters Union Local 225, said his members are still hurting. "Things are still pretty bleak for us," said Poole.

Those views are echoed by a range of statistics suggesting the ongoing impact of the recession. In Boston, Atlanta, Las Vegas and Charlotte, N.C., unemployment rose from June to July, and in a fifth city, Elkhart, Ind., it held steady at 18.8 percent, the highest level among cities we’re following. Six of the eight food banks we surveyed reported an increase in demand over the previous month.

We did find rays of light. Harold Craig, the vice president of economic development at Atlanta Technical College, said he’s heard of a few businesses relocating to Atlanta, and housing sales may be picking up slightly. Ann Nolan, a customer support manager in St. Cloud, which recently saw layoffs at its New Flyer bus factory, said nobody else she knows has lost their job—"so I think we’re on an even keel." (See our earlier story on St. Cloud’s economic struggle.)

In Seattle, Kian Pornour, a real estate agent, said sales are up. "If you compare now to last year, I would say we have come a very long way," said Pornour.

This month’s StimCities installment includes a new component statistic: the number of net jobs gained or lost in each city for the month. Net jobs replaces an earlier indicator we used based on Craigslist jobs postings, which turned out to be a less useful indicator than we had first hoped.

Seattle and Atlanta posted the biggest increases in net jobs, with 3,141 and 2,364, respectively. Boston, Charlotte and St. Cloud also posted a net increase in the number of jobs. But those cities will need to create even more jobs if they hope to turn the tide of the recession – and give life to the recovery that Vice President Biden talked about last week.