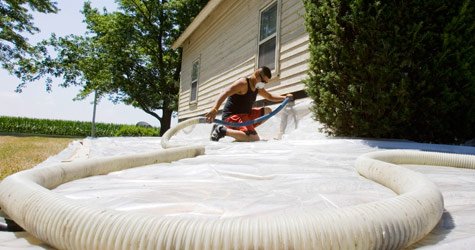 States, housing agencies and contractors have only a few weeks to go to tell the public how they're spending economic stimulus money and how many jobs they've created. But a government audit released Wednesday raises doubts about how reliable that information will be.

The report by the Government Accountability Office (PDF) provides a mixed review of the $787 billion stimulus package, now in its eighth month. Stimulus spending is slightly ahead of schedule, but some programs like housing and weatherization have been slow to get started because of red tape and confusion.

The auditors also raised questions about a Labor Department program to provide summer jobs for young people. As first reported by the Associated Press, officials were unable to find jobs for nearly a quarter of the youths in the program.

The report is the third by federal auditors tasked with overseeing how stimulus money is trickling down. As of Sept. 11, the federal government had already paid out $48 billion of the $49 billion that was estimated to go to state and local governments by the end of the fiscal year next week.

The vast majority of the money spent so far, about 84 percent, has been used to expand Medicaid and prevent layoffs of teachers and school support staff. But the auditors cited progress in paving roads, buying new transit buses and renovating public housing.

By law (PDF), any government agency, nonprofit or contractor that receives stimulus money must file a report by Oct. 10 detailing how much money they've spent, where it went and how many jobs it created or saved. Those reports will eventually be posted on Recovery.gov with the goal of allowing the public to search for stimulus projects in their community.

However, with so many reports coming in at once, from organizations that have never filed them before, how can the government -- or the public -- be sure the numbers are accurate?

"Significant risks exist that will likely negatively impact the completeness, accuracy and reliability of the information reported in the initial round," the report said.

Ed Pound, spokesman for the Recovery Accountability and Transparency Board, the independent watchdog that runs Recovery.gov, said some problems are expected. The board plans to check the reports before releasing them to the public.

"Recipients will have time to correct any errors that they might have made, or any other problems with their reports," Pound said. "We think that will help improve the data quality."

One of the most visible signs of the stimulus this summer was the army of teenagers sent out to clear trails, clean parks and work in offices. The summer jobs were part of a $1.2 billion program to train low-income youths, ages 14 to 24, and prepare them for the work force.

Both employers and participants felt the program was a success, and many states met or exceeded the number of youths they hoped to serve, the auditors found. About 297,000 young people participated nationwide, and program officials found jobs for 76 percent of them. A girl in Weatherford, Texas, who wanted to be a veterinarian, for example, was assigned to work in an animal shelter.

But the program was not without problems.

In Detroit, some youths waited in the rain for four hours to get their paychecks, and on several occasions, police had to be called to control the crowds, the GAO said.

A key goal of the program was to train young people in "green jobs," such as developing biofuels and retrofitting homes to make them more energy-efficient. But in Columbus, Ohio, two youths assigned to a company designing alternative-fuel vehicles spent most of their time clearing brush and painting a fence.

The report's authors questioned the Labor Department's gauge for the program's success -- a vaguely defined measure called "work readiness." The auditors found huge disparity in how local work-force agencies determined this. In Dayton, Ohio, for example, participants were given a 20-question true-false survey with statements like, "I understand the importance of demonstrating a positive attitude in the workplace."

"Measuring actual outcomes has proven challenging and may reveal little about what the program achieved," the GAO concluded.

Although auditors found that stimulus spending is ahead of schedule overall, two programs have been slow to get started, mainly because of confusion over requirements.

The Weatherization Assistance Program provides $5 billion to help low-income families lower their utility bills by making their homes more energy efficient. But most of the 16 states surveyed by the GAO haven't started yet because of concerns over the prevailing wage for contractors.

About half the states reviewed decided to wait until the Labor Department set the county-by-county wage rates to avoid forcing contractors to pay back wages. Iowa officials told auditors that back pay would be especially burdensome to smaller contractors.

Similar delays were reported for public housing projects because of confusion about whether a requirement that steel and other construction materials be made in the U.S. applied.

The U.S. Housing and Urban Development Department determined on Aug. 21 that the provision would apply for projects costing more than $100,000. In some cases, the report said, that forced housing agencies to find new vendors and contractors.