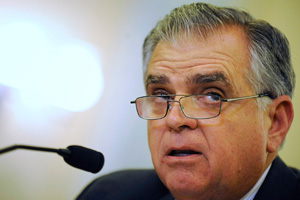 For the first time since ProPublica began tracking stimulus spending, more money has been paid out than is left in the pipeline. (Check out the details in our Stimulus Progress Bar.)

According to figures posted on Recovery.gov, the official site for tracking stimulus spending, federal agencies have now spent a total of $153 billion, excluding tax cuts. By comparison, the amount of money that has been committed to particular projects but not yet spent -- what the government calls "obligated," and what you might call the pipeline -- now stands at $152 billion. Meanwhile, there's still $276 billion in stimulus money (again, excluding tax cuts) that has yet to be obligated at all.

In mid-October, $172 billion in stimulus money had been obligated but not spent. By mid-November, that number had fallen to $163 billion, before falling to $155 billion by early December.

There are already rumblings about the decreasing amount of money moving through the system. Three weeks ago, a construction executive in Texas told ($) the Wall Street Journal that the pipeline of new stimulus projects was starting to dry up. "Having something to bid on is the lifeblood of the industry, and it's running out," said the executive, Tim Word. Transportation Secretary Ray LaHood responded on his blog that his department was "still funding road projects at an unheard-of pace," and accused the Journal of presenting a "doom-and-gloom scenario."

Ray LaHood is right, strictly speaking: The Department of Transportation has over $24 billion in stimulus money in its pipeline, more than three times the $7 billion it's already paid out. But the latest numbers on stimulus spending suggest that the Journal might have been right about the broader trend across the federal government. Of course, the government could just increase the rate at which it puts money into the pipeline. There's still that $276 billion in stimulus money that has yet to be obligated, and the federal government said last week that it's gearing up for infrastructure projects in the next six months, including broadband spending.

But these latest numbers serve as a reminder that the stimulus won't last forever. The dry pipeline phenomenon described by the construction executive in Texas will eventually extend to other sectors, from funding for clean energy and teachers' salaries to weatherization and broadband subsidies. Officials are already concerned: On Monday, for instance, New York State Comptroller Thomas DiNapoli released a report (PDF) looking at the funding cliff facing education.

For more details on spending, see our Stimulus Progress Bar.