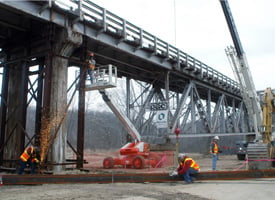 A crumbling 1933 bridge over the Osage River in central Missouri. A 79-mile electrical line along the Columbia River in Oregon. The repaving of Route 101 from Exeter to Epping near the New Hampshire coast.

These are some of the first projects that will be funded with the $787 billion economic stimulus plan, signed into law last week by President Barack Obama.

Starting Wednesday, money will start going out to the states in the form of Medicaid payments, the White House said Monday. (Here's a breakdown.) And in anticipation of more than $100 billion in transportation and infrastructure funding, states are beginning to bid projects and put shovels in the ground.

On Monday, New York released its first projects, which could be put to bid as early as next week -- a series of upstate bridges in Steuben, Oneida and Onondaga counties. Michigan, which has the highest unemployment in the country, has released a 1,200-page wish list containing about 16,000 potential projects.

Meanwhile, in a speech on the city budget, Minneapolis Mayor R.T. Rybak said the stimulus money would help him avoid laying off 57 police officers.

CQ Today has a nice wrap-up of what's going on in other states.