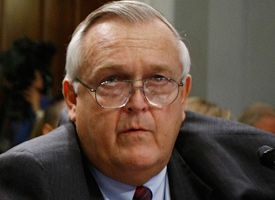 Here at ProPublica, we have been detailing questions about White House job estimates for months, especially state-by-state estimates that are a wee bit specific, given the margins of error involved.

Turns out, we're not the only ones worried. Among others questioning the estimates is none other than Earl Devaney, the stimulus oversight czar. (Formal title: Chairman of the Recovery Act Transparency and Accountability Board.)

According to a press pool report from the American Recovery and Reinvestment Act Implementation Conference, an unnamed state official from Vermont asked if state job numbers on the recovery.gov Web site were made up.

In response, Devaney said: "This whole thing has got me very nervous."

Devaney, according to the pool report, pointed to the difficulty of defining a saved or created job.

"We need to all be playing off the same sheet of music," Devaney went on. "If I'm going to be held accountable for this Web site, and there's a graph in there that talks about jobs created or saved, it's going to be as accurate as I can get it."

We have contacted Devaney's office to confirm the quotes and will let you know when we hear back.

And if anyone knows who the Green Mountain stater who asked the original question was, we would love to know.