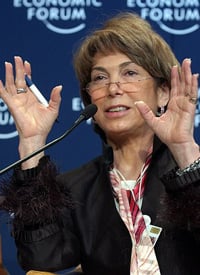 While at a conference in Singapore, a White House economic adviser said the United States could use a second stimulus, Reuters reports. The adviser also said the current stimulus is "performing close to expectations but not in timing." Just who is this adviser? She's Laura D'Andrea Tyson -- the former chairwoman of the president's Council of Economic Advisers during the Clinton administration, and the former director of the National Economic Council. Tyson told the audience that "we should be planning on a contingency basis for a second round of stimulus," implying that a second stimulus may be on the back burner rather than off the table for this administration.

Tyson's admission is timely. Rising budget deficits and unemployment have rekindled an already contentious debate over the stimulus. What is an administration to do? In today's lead Wall Street Journal op-ed, Gerald F. Seib descibes the administration as "boxed in, politically and rhetorically. If the White House is going to argue that the main problem with the existing stimulus plan is that it hasn't had enough time to kick in, it's hard to simultaneously argue that a second stimulus is needed."

Florida is abuzz over a recent Palm Beach Post report showing that Floridians receive less stimulus money than any other state -- just $505 per person. The Post blames spending formulas used to determine each state's stimulus package: "Many of these formulas work against Florida. For example, Congress returns 87 cents for transportation projects in the state for every $1 in gax taxes Floridians send to Washington."

Should the stimulus be implemented more quickly? Mais, oui! France will spend more than 75 percent of its stimulus money this year, according to a New York Times article. The French stimulus minister told the paper that by the time Washington gets around to doling out most of its money "the crisis could be over. America is six months behind; it has wasted a lot of time." Now, keep in mind that France is spending $37 billion, not $787 billion. Instead of filling in potholes it is using stimulus money for work on castles and historic buildings -- renovations fit for a king.