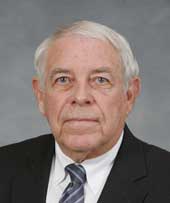 He marvels at the ballooning budgets of once-tiny state programs, inflated by the federal stimulus plan. The state program that assists low-income families with home weatherization, for example, gets $5 million to 10 million in a normal year. Now it is bracing for over $130 million in stimulus money over the next three years. That means the program can no longer rely simply on community groups and local nonprofits to weatherize homes, and will have to turn to unfamiliar contractors.

"There are folks out there right now saying, ‘How can I get my hands on that money without doing much work,'" Tolson says. The flow of money is so rapid, he says, that even a diligent government cannot live up to the idealistic accountability standards in the stimulus plan by itself.

And so Joe talks. To citizens, to state employees, to anyone who will listen, sometimes to groups of 200 or more. He tells them that nosy is the new polite, that they must all be their neighbor's keeper. "We have to have people in the neighborhood watching work that is going on near them, or on their neighbor's house, to make sure this money is spent wisely and we're getting good work," Tolson says. "It's difficult to spend this amount of money quickly without getting some shoddy work."

He tells people to stop at homes that are being weatherized and look for windows that are not caulked properly, or cracks in molding, or holes in insulation. "Just look for anything," he says, "and call somebody if you see something. It's time for everybody to get involved."

One weakness in the stimulus plan that state officials quickly pointed out was that no money was set aside for auditing and accountability offices charged with making good on President Obama's promise that stimulus projects would proceed "with a level of transparency and accountability never before seen in Washington." To address those concerns, the Office of Management and Budget issued a memo on May 11 informing states that they can spend up to 0.5 percent of their stimulus cash to meet oversight, auditing and reporting obligations.

But state auditor's offices, which have seen their budgets cut for years, believe other agencies will use most of that money, and so expect the stimulus to create more work for them but not more jobs. Some state legislators, like Tolson, are hoping that citizens will help out with oversight.

Recently we asked our readers to monitor a local stimulus project. Join the ProPublica Reporting Network and we'll send you more information.

Still, some state auditors say their broad stimulus accounting duties could leave holes elsewhere as they scale back on activities that have proven valuable in past years.
Because of budget cuts, the California state auditor's office, which has designated stimulus money as an area with a high risk for waste and fraud, has left open about 15 positions it would normally fill, and has cut back on employee travel, including to training events. "There are certain conferences that benefit [staff members'] technical skills for federal compliance work, which directly ties to the stimulus," says Elaine Howle, the California state auditor. "This year we can't travel to those."

On May 19, California voters rejected extending tax increases and other budget measures that might have made some of Howle's cuts less painful. Howle says she will have to cut back on performance audits, which seek to improve the efficiency and quality of state programs, in order to focus more on traditional fiscal audits of stimulus spending. "When people think auditors, they think fiscal," she says. "But performance audits create more efficient operations that save the state money, and provide better services to taxpayers." One of her office's performance audits cross-referenced child-care facilities with registries of sex offenders and found that some offenders were working in child-care facilities or even living in the same building. "Some of those things," Howle says, "maybe we just can't do this year."

In North Carolina, Beth Wood, the state auditor, has been identifying positions that can be cut if necessary. She says that using stimulus money to bring in accounting staff at state agencies could be tricky with such a short timeline. "You're going to hire people, teach them what to do, pay them, and then the money scales way back and they are no longer needed," she says.

Wood says that her office is experienced at accounting for money in state agencies, but that "when they pass it out to school boards and local governments, which is going to happen, it becomes harder to keep up with." In order to take on her office's stimulus responsibilities, Wood says that she may scale back audits of the state's 59 community colleges from every other year to once every five years.

"It will take us more time and a lot more headache if we wait five years, and the colleges don't get the immediate feedback," she says. In past years, Wood's office has identified problems that include community colleges sending financial aid checks to students who have dropped out. "If you catch that after a year, it's not too bad," she says. "If you let that go on for five years, it's terrible. It can affect the financial stability of the college itself."

The Florida state auditor's office may also watch many performance audits go by the wayside. The office has over 40 job vacancies, or about 10 percent of the entire staff. Don Hancock, the deputy auditor there, says that he is still waiting for some stimulus auditing clarifications from the federal government (they should arrive next month), but that he expects to be responsible for some of the job-creation estimates, which has not been on his list of responsibilities in the past.

Like Howle, Hancock guesses that performance audits will be the first casualty of the stimulus workload. "Performance audits a lot of times would turn up problems with state contracts that haven't been monitored," Hancock says. Thus, he adds, state agencies may just have to keep a closer eye on contractors than in the past.

Or perhaps, as Tolson advocates, the public will have to pitch in. We at ProPublica agree and are recruiting our readers to help us cover the stimulus. Join the ProPublica Reporting Network and we'll send you more information.