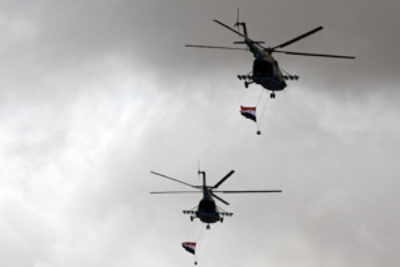 Documents posted online Monday by hackers associated with the online group Anonymous appear to give new details on a Syrian passenger flight from Moscow to Damascus that Turkish fighter jets forced to land last month. The incident sparked a diplomatic row between the two neighbors that have grown increasingly at odds as the government of Syrian President Bashar al-Assad attempts to crush a popular uprising.

The documents, which include letters from the chief executive of Syrian Arab Airlines, as well as a cargo manifest, could not be immediately authenticated. But they dovetail with what has been reported about the flight by Reuters and other news organizations.

ProPublica reported this week that a Syrian government plane ferried what flight records describe as more than 200 tons of “bank notes” from Moscow.

The letters from the CEO of Syrian Arab Airlines, if authentic, give the airline’s account of how the Turkish military forced down the civilian passenger plane, an Airbus A320. The letters are addressed to officials with the International Air Transport Association and the Arab Air Carriers Organization and appear to be official complaints about Turkey’s actions, which the Syrian CEO labels “air piracy.”

The letters, which are almost identical and are written in both English and Arabic, detail what happened to Flight 442 from Moscow to Damascus on October 10. They contend that without warning, two F-16 warplanes of the Turkish air force approached the Syrian passenger jet three times, zooming in as close as 50 meters. The fighter jets forced the passenger plane to land in a side area at Ankara airport. After two hours, Turkish commandos “stormed into the plane, sparking panic and dread among the passengers.”

The letters go on to allege that Turkish armed forces searched the plane for more than seven hours, eventually confiscating ten parcels weighing a total of 340 kilograms. In the letters and the cargo manifest, the contents are described as electronic equipment.

The Turkish Prime Minister told reporters that the cargo contained ammunition destined for Syria’s defense ministry. Russia’s foreign minister said the cargo included only parts for radar installations, and that such components were allowed under international transportation agreements.

The plane, which was allowed to continue its flight the next day, reportedly carried 37 passengers and crew, of whom 17 were Russian nationals. Russia objected that Turkey endangered the lives and security of the passengers.