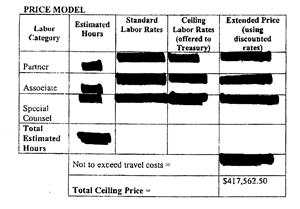 The Treasury Department has spent more than $159 million paying financial companies and legal firms to help the government dole out TARP funds. We at ProPublica have learned that the special inspector general for the TARP (SIGTARP), Neil Barofsky, has started an audit of how Treasury chose the companies and whether the government is being billed fairly for the work.

The audit was launched at the request of Sen. Tom Coburn, R-Okla. Coburn’s spokesman, John Hart, said a particular concern was that Treasury has redacted the labor rates from the contracts it has posted online. Treasury has hired some top law firms where partners can charge as much as $1,000 an hour, according to a 2009 billing survey by the National Law Journal.

"That seems like a very high price to pay," said Hart. "Why not just make it transparent instead of having a process in place that conceals the information? Redacted information raises red flags."

Treasury, which has not responded to ProPublica’s requests for comment, has contracted with nearly 60 companies to help it run the $700 billion TARP. The largest contracts by far are with Fannie Mae and Freddie Mac, to advise and help Treasury run its $75 billion foreclosure prevention program. Treasury could pay Fannie and Freddie as much as $373 million over the life of the program, which extends into 2014, according to the Government Accountability Office. The GAO reported last year that the total potential value of all the TARP contracts so far is about $600 million.

The audit will assess both whether Treasury has gotten the best price for the services and whether it’s making sure it is getting what it paid for, according to a SIGTARP letter announcing the audit. SIGTARP has initiated 18 audits in its short lifetime.

Treasury has acknowledged it took shortcuts to fill some of the contracts. The department bypassed the normal federal government bidding process for "a number of contracts" because of the "unusual and compelling urgency… of the national financial crisis," according to Treasury’s Web site for the TARP. Federal contracting law allows for such exceptions, and Treasury says that in those cases, there were nonetheless "several" competing bids for the contracts.

This isn’t the first time the transparency of Treasury’s disclosure of its bailout contracts has been questioned. As ProPublica reported last year, when the Treasury Department first announced that it had hired the Bank of New York Mellon (a bailout recipient) to track, hold and disburse the TARP money, it redacted the contract’s value. The GAO eventually disclosed that figure (approximately $20 million), but details of the contract, including how the bank would be compensated, remained blacked out. Finally, five months after Treasury promised to release those details, it followed through.