Sometimes the old expression “it takes a village” applies very much to investigative journalism.

Today’s report on America’s stalled war against child abuse required the combined efforts of not only The Boston Globe and ProPublica, but also financial support from four outside funders, including Participant, a producer of the Academy Award-winning movie “Spotlight.”

And none of it would have happened if not for the relentless efforts of two Spotlight Fellows and a crew of interns who didn’t give up during the more than two and a half years they needed to collect extensive information about child abuse from all 50 states, Puerto Rico and the District of Columbia.

Emily Palmer, who writes about courts and crime for The New York Times, and Jessica Huseman, who writes about elections at ProPublica, were selected to be Spotlight Investigative Journalism Fellows in May of 2017 on the strength of their proposal to prove that virtually every state was violating the nation’s primary law against child abuse. The judges were impressed with their ambition as well as the importance of the topic.

After all, Participant, founded by Jeff Skoll and dedicated to entertainment that inspires social change, created the Spotlight Fellowship in 2016 as a way to champion tough investigative reporting in the wake of the enormous success of its film “Spotlight.”

But the fellowship was designed to provide funds for a one-year investigation, and Palmer and Huseman’s task proved much taller than they initially expected as many states were reluctant to provide details, especially about children who died from abuse. So the investigation continued into a second and then a third year.

Along the way, three other organizations provided financial support to the project, starting with the Massachusetts-based Freelance Investigative Reporters and Editors, or FIRE, which provided initial funding and reporting services. Later, The Toni Stabile Center for Investigative Journalism at Columbia University as well as Investigative Reporters and Editors, a professional organization, provided funding as well. (No funding went to Huseman, a full-time staff member at ProPublica, or to ProPublica itself.)

Through it all, Palmer and Huseman just kept going.

In the end, working with interns from Columbia Journalism School, Palmer and Huseman were able to demonstrate that not a single state follows every major provision of the Child Abuse Prevention and Treatment Act — but the federal government has taken virtually no enforcement action. The reporters also showed that the federal government simply does not know how many children die each year from abuse and neglect.

Their report is in the spirit of The Boston Globe Spotlight Team’s history of long-term investigations, including Spotlight’s investigation of sexual abuse in the Catholic Church, the topic of the 2016 movie. And it certainly makes us all appreciate why investigative reporters need a team behind them. 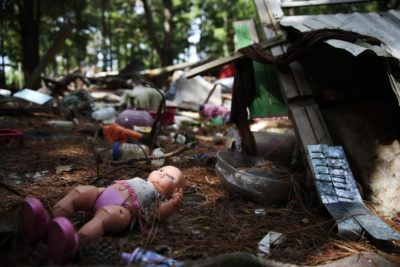 The Navy Accused Him of Arson. Its Own Investigation Showed Widespread Safety Failures.