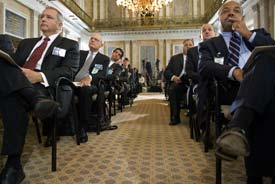 In President Barack Obama’s stimulus speech on Tuesday, he said he’s trying to get Congress to pass legislation creating a tax credit for employers who hire new workers. But TheWall Street Journal reports that while business owners across the country appreciate the effort, they need more specifics, and more customers. "Giving me a tax credit if I hire somebody? That’s not a really big incentive for me," one business owner tells the Journal. "We need customers in the door."

The Congressional Oversight Panel, which was created last October to oversee the government’s bailout program, issued a report  on the TARP program on Wednesday,  finding that while problems remain, the program "can be credited with stopping an economic panic." In an article in The New York Times, reporter Jackie Calmes writes about some of those remaining issues, including banks’ resistance to making loans, toxic mortgage-related assets still causing problems with big banks’ balance sheets, and the vulnerability of small banks.

Business groups are pushing education to the forefront, Politico reports. The Springboard Project of the Business Roundtable, which represents CEOs from the nation’s largest firms, released a report on Wednesday  that includes a series of recommendations for changing the federal education system to reflect changes in the job market. Among the recommendations: shift federal spending to reward schools for their graduate rates, rather than their enrollment rates; expand the role of community colleges and adapt curricula to fit the needs of the job market; and use technology to make it all more accessible.