It's almost rote by this point. President Bush tries to expand the power of the executive. Civil libertarians or human rights groups loudly protest and threaten lawsuits. This week, an unlikely new critic joined the chorus criticizing the administration's broad view of executive power -- the U.S. Chamber of Commerce. 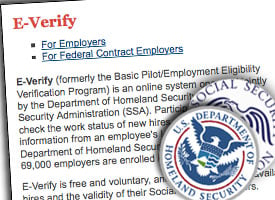 On Aug. 11, the U.S. Chamber submitted a 29-page comment (PDF) condemning a proposed rule that will require federal contractors to use a much-criticized program, known as E-Verify, designed to confirm the citizenship of employees. The Chamber argues that the president "has stepped beyond the limits of his executive power" and that he "seeks to regulate immigration policy under the veil of a procurement statute." A job, the Chamber believes, that should be left to Congress.

As it stands today, the program, operated by the Department of Homeland Security and the Social Security Administration, allows employers voluntarily to verify online whether their employees are in the country legally. Congress established the program in 1997 as a pilot program with an expiration date of November 2008.

The program has been beset by troubles. A June 10 congressional hearing and a report (PDF) by the Government Accountability Office on E-Verify exposed problems with the accuracy of the government's databases and misuse by employers. According to government auditors, it would require a substantial investment in staff and new resources to successfully make the program mandatory. On July 31, the House voted to renew the program on a voluntary basis for five more years while the GAO conducts more audits. The legislation is still pending in the Senate.

"If they [the administration] don't like the law, they should go to Congress and get it changed," says Angelo Amador, director of immigration policy for the Chamber, which argues the administration's rule is too broad and too costly.

Amador raised the possibility of a lawsuit if the rule is enacted as proposed.

While the Chamber generally views the administration as "a friendly administration," Amador said, it has sued Democratic administrations for overreaching and it would be "intellectually dishonest" not to do so for Republican ones.

The administration's proposal has galvanized a broad coalition of opponents. In addition to the Chamber, critical comments about the rule have come from the American Council on Education, the National Immigration Law Center and even from another governmental agency, the U.S. Small Business Administration (PDF).

Yesterday, the Chamber fired off another letter (PDF), this time to the Department of Homeland Security, complaining that the agency's Web site for E-Verify makes it sound as if the proposed regulation is now the law. The site states that "E-Verify is a voluntary program for all employers, with the exception of federal contractors." (Emphasis added.) In a letter to DHS, the Chamber called the statement "misleading and, at worse, simply incorrect."

Asked for a response, DHS spokesperson Amy Kudwa said, "The Chamber of Commerce has made its position abundantly clear on E-Verify and their desire to support businesses that want to hire illegal immigrants."

Kudwa characterized the program as a success and said the agency has "made significant inroads" in fixing problems. "We feel confident it has the capacity to incorporate added users" from the new regulation.

After talking to ProPublica, DHS updated the Web site to include information about the rulemaking process.