The militarization of St. Louis and other local police departments can be traced to two major sources – the federal 1033 Program, a section of the National Defense Authorization Act passed in the 1990s, as well as federal homeland security grants to states. Here are a few facts that you might have missed about the Pentagon pipeline and the rise of military equipment and tactics in local police departments. 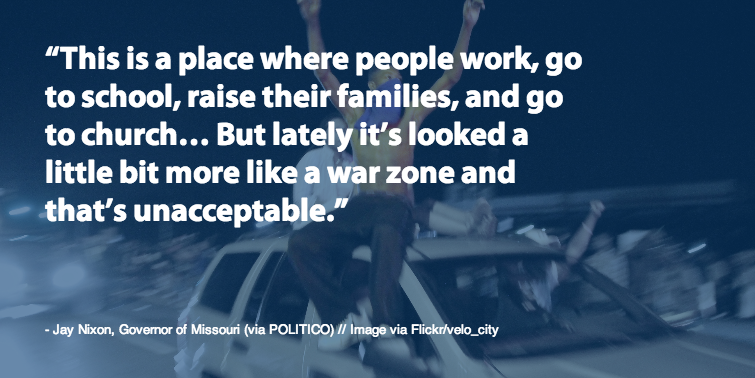 The Defense Department has provided tens of thousands of pieces of military equipment to local police departments for free. As a “long season of war” draws to a close for the U.S., surplus weapons meant for foreign battlefields are finding their way into police departments across the country, the New York Times reports. The free supplies provided to local law enforcement include machine guns, magazines, night vision equipment, aircraft and armored vehicles. Local news outlets have investigated the flow of military-grade weapons and equipment into police departments in Utah, Indiana, Georgia and Tennessee.

The DOD program, known as 1033, has provided $4.3 billion in free military equipment to local police. The 1033 program allows the Pentagon to transfer weapons to local police departments on permanent loan for free. The program first started in the 1990s as part of an effort to arm police during the drug crisis.

How it All Started 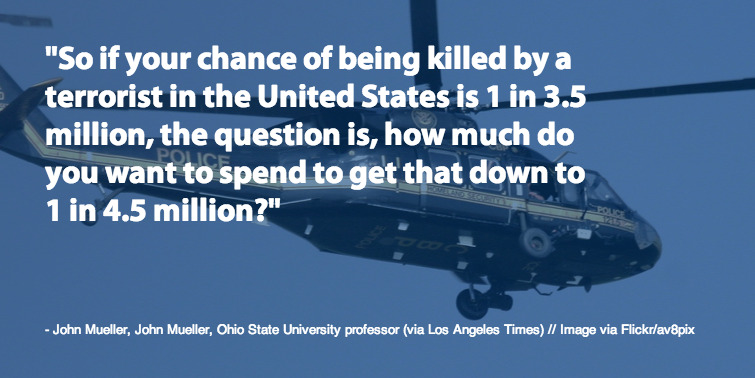 The Justice Department, working with the Pentagon, began to pay for military technology in police departments during the Clinton years. In 1994, the Justice Department and the Pentagon funded a five-year program to adapt military security and surveillance technology for local police departments that they would otherwise not be able to afford. Even then, the technologies raised concerns with civil rights activists, according to the Christian Science Monitor.

States received at least $34 billion in federal grants to purchase military grade supplies in the decade after 9/11.Thousands of local police departments across the country went on a “buying spree” fueled by billions in federal grants, CIR reported. Even in remote cities like Fargo, North Dakota, rated one of the safest cities in America, police officers have traveled with military style assault rifles in their patrol cars. We talked to one of the reporters behind the story, G.W. Schulz, about his findings on a MuckReads podcast in January 2012.

Department of Homeland Security spending on domestic security hit $75 billion a year in 2011. But that spending “has been rife with dubious expenditures,” the Los Angeles Times reported, including $557,400 in rescue and communications gear that went to 1,500 residents of North Pole, Alaska, and a $750,000 “anti-terrorism fence” that was built around a Veterans Affairs hospital in North Carolina. 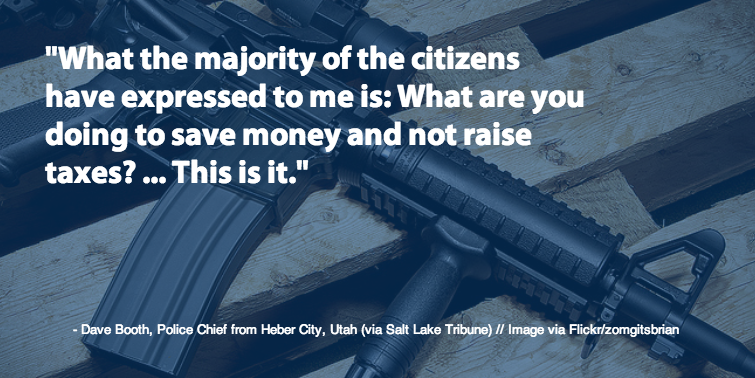 St. Louis County has received at least 50 pieces of free tactical gear from the Defense Department in the last four years. Newsweek obtained a list of the “tactical” items that St. Louis County police procured through the 1033 program, including night vision gear, vehicles, an explosive ordnance robot, rifles and pistols. Popular Science breaks down the types of body armor, vehicles and weapons used by Ferguson police, as documented by journalists and witnesses on social media.

Police conduct up to 80,000 SWAT raids a year in the U.S., up from 3,000 a year in the early ‘80s. That’s according to criminologist and researcher Peter Kraska. But according to a recent study by the American Civil Liberties Union, almost 80 percent of SWAT team raids are linked to search warrants to investigate potential criminal suspects, not for high-stakes “hostage, barricade, or active shooter scenarios.” The ACLU also noted that SWAT tactics are used disproportionately against people of color.

The grenade launchers used by Ferguson police can cause serious injury. Flash grenades like those used in Ferguson have been shown to cause serious harm in the past. In one instance, a flash-bang grenade exploded near a toddler’s face during a drug raid by a local SWAT team in Georgia. The boy spent several weeks in a burn unit and was placed in a medically induced coma. County officials later said that they did not plan to pay the toddler’s medical expenses.

Real Estate Investors Sold Somali Families on a Fast Track to Homeownership in Minnesota. The Buyers Risk Losing Everything.

How Jessica Logan’s Call for Help Became Evidence Against Her

What the Disability Community Told Us About Sheltered Workshops

What Happened to Rezwan