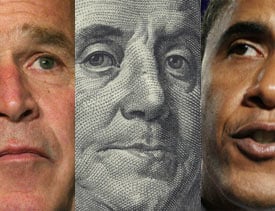 We’ve been hearing for weeks about how the Treasury Department is on the cusp of dramatically widening its current bailout program. First it was insurance companies that were going to get Uncle Sam’s help. Next came other financial firms like bond insurers and specialty finance firms. The generous terms of the government’s investment is proving irresistible. But the official announcement on expanding the bailout is still forthcoming. What gives?

According to background sources whispering to both the New York Times and Washington Post, Hank Paulson’s Treasury has put such major moves on hold in order to make sure the incoming administration is on board.

There seems to be two reasons for this. The first is a practical one. Treasury officials don’t want to adopt a policy only to have an Obama administration drop it or take a different direction. As one former Treasury official tells the Post, "The last thing you want to do is start something and have the new guys unravel it in 60 days. It sends mixed messages to the markets." As a Treasury spokeswoman puts it: "Continuity is in the best interests of the markets and the economy."

But according to the Times, there’s also a political angle:

Although the cooperation with the Democratic-controlled Congress is expected to go smoothly, the coordination with the Bush White House is a dicier matter. The Obama camp is feeling pressure from the administration, according to several people familiar with the situation, specifically from Treasury Secretary Henry M. Paulson Jr., to "co-own" the bailout program, which remains unpopular among voters despite a broad consensus that it was essential to avert wider economic collapse.

Both papers note that Treasury has made room at the department for an Obama transition team, but no one has shown up yet.

Administration officials don’t exactly deny that they’d like the comfort of Obama’s support for their bailout moves but say it’s far from the only reason things are slowing down a bit. They’d like a little more time to see if the billions going to the banks is having an effect before taking the plunge with other firms, one "administration official" tells the Post. As we reported yesterday, they say it’s "premature" to make an assessment.

Meanwhile, the cries for help are only getting more plaintive:

Toni Simonetti, a spokeswoman for [General Motors financing arm] GMAC, said her company has few options for raising money other than from the government and is now applying to become a bank holding company. The company's financial troubles mean it cannot lend to dealerships that need loans to buy vehicles for their lots or to people who want to buy cars.

"We've had such a difficult time getting access to funding," Simonetti said. "All of these financing tools are now at the government, but you have to be a bank holding company to have access to them. . . . We are definitely at the government's mercy." GMAC has been in close consultation with the Treasury and Fed about its plans to restructure, she said.