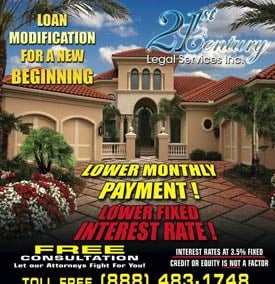 Last week, we published a story examining the boom in "foreclosure rescue" companies, firms that promise — in exchange for a large upfront fee — to persuade lenders to modify desperate homeowners’ mortgages. The story was done in collaboration with American Public Media’s Marketplace and resulted in two reports that aired last week. You can listen to them here and here.

We focused on one company in particular, Southern California-based 21st Century Legal Services. As we reported, four states obtained court injunctions barring the company from operating there, but those actions did little to slow the company down. Since then, however, we’ve learned that the company is under investigation by the FBI.

Last Wednesday, the FBI executed search warrants at eight locations in the Rancho Cucamonga area, said Laura Eimiller, spokeswoman for the FBI’s Los Angeles office. Both business and residential addresses were searched, she said, but she would provide no other details about the continuing investigation. Kathleen Moreno, the lawyer for 21st Century president Andrea Ramirez, confirmed that Ramirez’s residence was among those searched.

The FBI searches seem to have finally stopped the company from operating. Its Web site is down, and no one answers the phone. But as for whether its unhappy customers can hope to recoup their money, it’s far too early to tell.