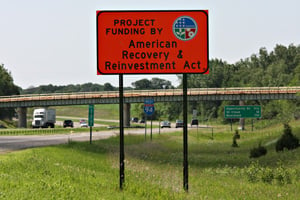 The Los Angeles Timesand the Chicago Tribune report that of the 5,600 road and bridge projects approved as of July 10, more than 3,600 have not yet started construction. Six of the 10 largest highway and road projects nationwide have yet to break ground, according to the two publications. The figures appear to match numbers provided at last week's press conference hosted by the American Association of State Highway Transportation Officials, where officials pointed to more than 2,000 projects around the country that are in progress. Here at ProPublica we just launched the Stimulus Spot Check, a citizen journalism effort aimed at figuring out the status of road and bridge projects nationwide.

Pennsylvania has fallen behind its neighbor New Jersey in spending stimulus weatherization funds, reports the The Philadelphia Inquirer. The money was made available to Pennsylvania by the federal government in April, but it cannot be spent until the state legislature passes the much-debated state budget. The Inquirer points out that the 42 community agencies tasked with training volunteers and project management can't get started until the budget passes; they do not have funds on hand to cover weatherization costs.

When President Franklin D. Roosevelt instituted the New Deal he focused the nation's attention on the construction of the Bonneville Dam in Oregon and Washington. Through the Army Corps of Engineers, in less than  four years 17,000 workers constructed a dam that provided electricity to the Pacific Northwest. Now, the Bonneville Power Administration is the beneficiary of stimulus funding, which it plans to use to increase its wind power grid. This time around, though, the work is proceeding slowly and much of it won't start for years, reports TheBoston Globe. Stephen Wright, Bonneville's administrator, tells The Globe, "It's a different time. Things don't move as quickly. Just the requirements of the National Environmental Policy Act would make it impossible to do what Roosevelt did."

Robert J. Samuelson, a weekly columnist for The Washington Post, wrote an op-ed published today called "The Squandered Stimulus." Samuelson writes: "But the defects of the $787 billion package go deeper and won't be cured by time. The program crafted by Obama and the Democratic Congress wasn't engineered to maximize its economic impact. It was mostly a political exercise, designed to claim credit for any recovery, shower benefits on favored constituencies and signal support for fashionable causes."

On Friday the National Employment Law Project put out a press release stating that the American Recovery and Reinvestment Act has provided "unprecedented help at a critical time" to the country's newly unemployed: "100% federally funded extended benefits, which last 20 to 53 weeks depending on the state's unemployment rate, are covering 2.8 million workers." A research center and advocacy group that focuses on workplace issues, the project also warned that by the year's end 1.5 million people will exhaust their unemployment benefits and that more help is needed. Here is its chart (PDF) showing how many people will lose their unemployment benefits in each state. For more information, read "Many States Leave Federal Unemployment Money Unclaimed" by ProPublica's Olga Pierce.

The stimulus sign saga continues. New York state will not purchase signs directly and has instructed contractors bidding on projects to include the cost of the signs in their bids, Syracuse's Post-Standard reports. The federal government leaves it up to the states to decide if they'll plant American Recovery and Reinvestment Act signs next to road and bridge construction projects. Last week, Texas announced that it won't spend any money on the signs.

The Senate Homeland Security and Governmental Affairs Committee has postponed a hearing on stimulus spending less than 24 hours before it was to begin. The hearing, "Follow the Money: An Update on Stimulus Spending, Transparency, and Fraud Prevention," was scheduled for Tuesday morning. A spokeswoman for the committee told us that the hearing had been pushed back to a date yet to be determined, but she did not give a reason for the postponement. One witness set to testify at the hearing was Earl Devaney, the chairman of the Recovery Accountability and Transparency Board, which oversees stimulus spending.