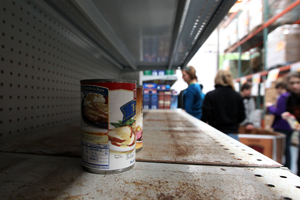 First, in the name of the holiday, the giving.

Food banks and soup kitchens are more stocked than usual this year, thanks to an extra $100 million in resources from the stimulus, on top of the $250 million originally budgeted by the federal government, reports The New York Times. It's a good thing, too -- a recent survey by Feeding America, a nationwide network of food banks, found that requests for emergency food assistance were up by 30 percent from last year.

Next up, the Department of Energy has awarded $620 million in stimulus funds to Smart Grid projects, according to a press release issued Tuesday. The money is going to 32 demonstration projects, including large-scale energy storage, smart meters and a slew of other smart technologies, which are intended to build a more efficient energy grid. You can check out the projects here (PDF). Take a look, and if you see anything of interest, let us know.

And then there's the taking.

Part of the stimulus package called on federal agencies to impose higher fines -- as high as $1.5 million -- on medical providers that don't adequately protect their patients' data. That's bad news for the University Medical Center in Las Vegas, where hospital executives learned last week that accident victims' personal information was being passed out to local attorneys, who were then using it to solicit business from the patients. The Las Vegas Review-Journal reports that officials at the hospital suspect at least one employee was behind the scheme. But hospital execs told the paper that the only way the hospital would be forced to pay the hefty new fines "is if we had confirmed evidence of a breach and chose to do nothing." The FBI is investigating.

And finally, the Carson City Airport Authority in Nevada is slated to receive $9.6 million in stimulus money, even though it has been cited in past audits for having "significant deficiencies" in its ability to administer federal programs, reports Anupama Narayanswamy of the Sunlight Foundation. The foundation took a look at a series of audit reports, which are required of nonprofits and state and local government agencies that spend more than $500,000 in federal funds annually. Overall, $119 million in stimulus money has gone to 106 recipients that have been cited this year for having "significant deficiencies." Other institutions that were found to have deficiencies included housing authorities in North Carolina, Georgia, Illinois and California; health care facilities in Pennsylvania, Florida, Washington state, Wyoming and North Dakota; and higher education institutions in Maine, Minnesota, New York and Iowa. You can look at a list of stimulus fund recipients cited in 2009 for having significant deficiencies here.