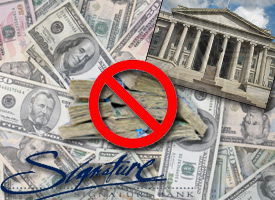 Signature Bank of New York says it wants to give that $120 million it received from the government three months ago right back. Put that together with announcements from two other banks that they'll be returning the money and you've got a trend, right?

But so far there seem to be far more banks eager to get their hands on Treasury Department funds than there are to get rid of it. Every week, the Treasury invests millions more in 20 to 30 banks. Last week was no different: The Treasury invested $285 million in 22 banks. You can see our running tally of all those banks here. Setting aside the auto companies and floundering giants like AIG, Citigroup and Bank of America, the Treasury has so far invested $152.6 billion in nearly 500 banks. So while three banks say they're going to give the money back soon, 487 won't be.

This morning, Treasury official Neel Kashkari testified to Congress that 500 to 1,000 more banks are "in the pipeline" for an investment, meaning that Treasury's weekly injections will likely continue for several more months.

Signature's CEO Joseph DePaolo announced that his bank would be returning the money at an investor conference yesterday, but said that he was still waiting for federal regulators' OK. The law requires that banks give the Treasury 30 days' notice before returning the funds. He did not explain why the bank was returning the money, and a spokeswoman declined to comment.

The New York Timesfirst reported the announcement in a story last night on banks seeking to return bailout money. (The list of banks that have expressed a desire to return the money is much longer than those that have actually begun the process.) The main motivation, the paper reported, is the growing number of strings attached to the money. Banks are pressured to lend and have to watch their expenses, lest a soiree or junket prove outrageously swanky. The most aggressive and concrete new terms are the executive compensation limits included in the stimulus bill. Under those terms, Signature's five highest compensated executives would have seen their bonuses limited.

Of course, neither Signature nor any of the banks returning the money have been crystal clear in just why they're doing it. TCF Financial's CEO, for example, only said that "recent actions" from Treasury and "possible congressional or regulatory restrictions/mandates" had "changed the rules." No mention was made in TCF's announcement that the new compensation rules will affect bonuses for TCF's five most senior execs and 10 next highest compensated employees.