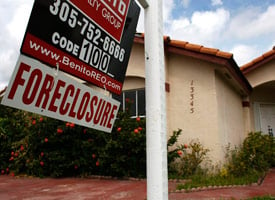 The Miami Herald wrapped up its three-part investigation into Florida's mortgage industry this week with news that state regulators let crooked mortgage professionals keep their licenses after violating the law. Prompted by the Herald's reporting, the state opened an investigation and the mortgage regulator resigned on Tuesday.

The Wall Street Journalreported ($) that the mortgage crisis has begun to affect five of the largest U.S. credit unions, which are non-profit cooperatives that act similarly to banks. The U.S. regulator of credit unions said that the trouble is most likely temporary, but others worry that the unions may be underestimating the crisis.

The New York Times says that the market through which mortgages are packaged and sold as securities is stagnating, despite the fact that it is now heavily regulated by the government.

The government's increased involvement with unstable financial institutions has exposed taxpayer dollars to an unprecedented range of risky loans, reported the Washington Post. Some analysts argue that the government should let more troubled banks fail rather than keeping them "on life support."

John McCain's lobbyist connections returned to Scandal Watch this week in response to the scrutiny of his top foreign policy adviser's ties to Georgia. The adviser, Randy Scheunemann, was a lobbyist for Georgia ($) up until this past March and prepped McCain for an April phone call with the Georgian president on the same day that his firm extended its contract with the country. McCain has been a staunch defender of Georgia throughout the recent conflict with Russia.

The New York Timeshighlights the fine line between lobbyist and adviser that Scheunemann must walk. A lobbyist for Public Citizen warns that this dual role "is a serious revolving door problem."

Another McCain adviser, John Green, pushed for relaxing the Cuban embargo as a lobbyist for a French liquor company. McCain has spoken out in support of the government's strict embargo on Cuba.

McCain also came under fire when the APnoted the irony of his campaign promise to the town of Wilmington, Ohio to open an investigation into a deal between DHL and UPS that threatens to cost the town 3,000 jobs. But, as the Cleveland Plain Dealerreported last week, McCain played a role in the sale of the original Wilmington employer, Airborne Express, to DHL in 2003. Rick Davis, now McCain's campaign manager, was a lobbyist for DHL at the time.

The military tribunal at Guantanamo Bay opened pre-trial hearings for its second terror case on Wednesday, amidst questions about the future of the military tribunal system. The defendant, Omar Khadr, was captured in Afghanistan in 2002, when he was just fifteen. His lawyers plan to argue that Khadr ought to be charged as a child soldier, not a war criminal, and they may cite the abuse he allegedly received while in detention.

The legal adviser to the tribunals, Air Force Brig. Gen. Thomas Hartmann, was barred from a separate trial on Thursday. The judge ruled that by speaking out in support of the prosecution, he violated the impartiality that his position requires. Hartmann had been barred from the trial of Salim Hamdan as well. Meanwhile, a juror from Hamdan's trial spoke to NPR this week and questioned the strength of the government's evidence against him.

The Boston Globeprofiled terror suspect Aafia Siddiqui, who is in New York facing charges of murder and assault. Siddiqui, who has been on CIA and FBI wanted lists for five years, was arrested in Afghanistan in July and handed over to U.S. military and intelligence officials shortly afterwards. But Siddiqui's family suspects that the U.S. has been holding her in secret detention for five years.

And finally, an appeals court in New York has decided to rehear the case of Maher Arar, a Canadian man arrested at JFK airport in 2002 and sent to Syria, where he claims he was tortured. Secretary of State Condoleezza Rice admitted last October that his case had not been "handled particularly well," but last month, Attorney General Michael Mukasey refused to open an outside investigation.

On Thursday, defense lawyers requested the dismissal of the Justice Department's case against Sen. Ted Stevens (R-AK). In pre-trial motions, they argued that the investigation intruded on his constitutionally protected legislative activities by questioning his Senate aides. They also charged ($) the prosecution with presenting vague and prejudicial evidence.

In response, federal prosecutors released previously unseen evidence against Stevens and rebutted the defense's invocation of the Speech or Debate Clause. The new evidence points to more gifts from VECO, a suspicious Florida real estate deal, and suggestions of potential witness tampering.

Prosecutors also responded to the senator's request that the trial be moved to Alaska - to allow nighttime campaigning - with insistence that it remain in Washington, D.C.

The Congressional Budget Office released a report (PDF) this week saying that the U.S. will have steered $100 billion to military contractors in Iraq by the end of 2008.

The friendly-fire death of a Canadian soldier in Afghanistan last weekend prompted Canadian and U.S. military officials to question the private Afghan security contractors - from companies Compass and USPI - who had fired the shots from their passing vehicle.

An Army major pleaded guilty to accepting bribes in exchange for a $5.8 million bottled-water contract in Kuwait to favored companies.

And finally, Aviation Week reported that Boeing may opt out of the rebidding for a $35 billion aircraft tanker deal. The Pentagon awarded the contract to EADS in April, but later admitted that its process had been flawed. McClatchyreported that the leaders of France, Germany and Britain had all lobbied President Bush personally in an effort to secure the contract for European aerospace giants EADS and Northrop Grumman.

The Pentagon reopened bidding on an aircraft tanker deal to EADS and Boeing last week, but angry Boeing supporters said that the specifications in the new deal favored EADS' tankers.