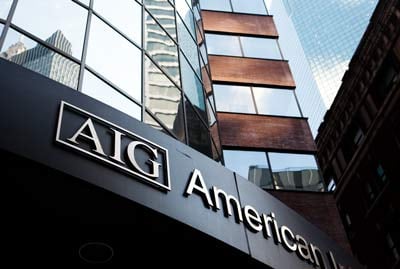 March 2008 -- AIG agreed to the retention bonuses. The company's bets on mortgage-backed securities had already started to sour, forcing AIG to take a $5 billion hit.

Sept. 22, 2008 -- The company notified the Securities and Exchange Commission -- a week after the first bailout -- that the retention bonuses program had come into effect. Approximately 130 executives would get the first installment in December 2008, and the remainder in December 2009.

Oct. 22, 2008 â New York Attorney General Andrew Cuomo obtained an agreement from the company not to pay bonuses from a specific fund to executives in the Financial Products unit.

Late November 2008 -- AIG agreed to suspend bonuses for certain executives, including CFO David Herzog. At the same time, though, the company was reportedly promising retention bonuses as part of its efforts to recruit new hires for its subsidiaries in Asia.

Dec. 1, 2008 -- Congressman Elijah Cummings wrote to AIG CEO Edward Liddy, asking for full information about the retention bonuses, calling the program a "slight of hand" to get around the company's promise not to pay performance bonuses.

Jan. 27, 2009 -- Cummings spoke up again, telling Bloomberg that he was "extremely disappointed -- but not surprised -- to learn that AIG will be awarding bonuses to the very division that drove the company into the ground."

Early March 2009 -- AIG announced a $61 billion loss, the biggest in corporate history. The government agreed to Bailout III -- an additional $30 billion from Treasury.

March 11-12, 2009 -- An Obama administration official told Reuters that Treasury Secretary Tim Geithner only found out about the bonuses last Tuesday, called AIG to protest them on Wednesday and told the administration on Thursday.