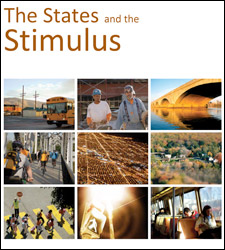 * A report (PDF) issued Monday by Smart Growth America, a coalition of organizations that fight urban sprawl, gives props to states that decided to use stimulus dollars to fund maintenance projects in their backlog and faults some states for not spending more on transit projects. A representative for the Colorado Governor's Economic Recovery Team criticizes the report, saying, "It does not take into account the fact that the Recovery Act allocates separate funds just for transit projects" -- as quoted in the Denver Business Journal. You can get the Washington Post's take here and Reuters' here.

* Things are getting meta. A National Science Foundation grant amounting to almost $400,000 has been given to the University of Virginia to study the impact of stimulus funds on hiring in science and engineering.

* The stimulus is proving to be a windfall for low-income health care centers: Qualifying centers around the country will receive $851 million in the latest round of stimulus health grants. Colorado's centers will receive $17 million; California's will get $109 million.

* Ready, set, go! The Department of the Treasury began cutting $250 checks for veterans on Monday and says it'll be done by close-of-business today, per a press release issued by the Department of Veterans Affairs. The bottom line: $500 million in payments to approximately 1.9 million veterans and eligible beneficiaries.

* Today is the deadline for states to submit applications for their piece of $48 billion in state fiscal stabilization funds. Most of that money (81.8 percent) is earmarked for public schools, and the rest can be used flexibly to avoid cuts to public services like police and fire. With hours left for states to claim their money or risk losing it, all but three have submitted applications. According to e-mail sent by the Department of Education to ProPublica at 11:03 a.m., Louisiana, Missouri and Texas had not yet submitted applications. Other states, like Vermont, had to hash out some budget issues in order to slip in just in time. (Thanks to ProPublica Reporting Network member Bill Peberdy for pointing this out.) We’re going to make calls to the three states above to see where they are, and we’ll let you know what we hear back.

* The "Buy American" provision that requires companies awarded stimulus projects to use only iron, steel and manufactured goods produced in the U.S. no longer applies to broadband builders. "It would be difficult, if not impossible, for a BTOP (Broadband Telecommunications Opportunity Program) applicant to have certain knowledge of the manufacturing origins of each component of a broadband network, and the requirement to do so would be so overwhelmingly burdensome as to deter participation in the program," says Anna Gomez, deputy assistant secretary for communications and information, in a Commerce Department notice. Associated General Contractors, which represents construction companies, recently blamed the provision for delays and increasing costs.