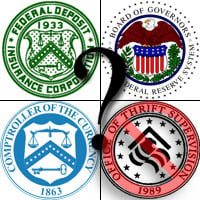 A couple of weeks ago, Obama administration sources whispered to the Wall Street Journal and Washington Post about their plans for a dramatic overhaul of the regulatory system. No longer would financial institutions be able to shop for the regulator with the lightest touch: The current system, with its four distinct regulators, would be chucked in exchange for a single regulator to oversee banks. Well, the administration is now more modest with its plans, anonymous sources tell the Journal, since a major reorganization "could ignite messy turf battles that might slow or even derail the entire process." As for the old problem of banks shopping around: "Government officials believe that if they fill gaps between agencies and eliminate overlaps, banks and other companies will be less able to shop for light oversight."

One regulator seems almost sure to not survive, however: the woeful Office of Thrift Supervision, which has been sharply criticized for its laxity in overseeing Washington Mutual and IndyMac.