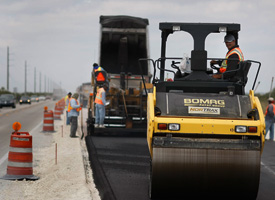 Florida is picking a fight with the House Committee on Transportation and Infrastructure over how fast it is spending stimulus dollars. The Associated Press reported that last week, committee chairman Jim Oberstar, a Democrat, ranked Florida dead last for spending highway stimulus dollars. Gov. Charlie Crist, a Republican, shot back that his state's spending is characterized by "integrity, rather than speed." The state's stimulus czar sent Oberstar a letter saying that the committee's rankings were based on bad data and generalizations. In response, Oberstar repeated his position that Florida really is in last place.

Stimulus dollars for small businesses are off to a slow start. The New York Times reports that a $255 million lending program announced by the Small Business Administration in May had awarded just $36.8 million as of Monday. The money is intended to flow through banks, but the article suggests that the reason for the slow pace is that lenders face little financial incentive to take part in the program. "There's not a lot of profit motive in a $35,000 loan stretched over six years," one economist told the Times.

Stimulus money is getting to states at an uneven pace. USA Today reports that some states, including California and Michigan, have received a higher share of their money than others, such as Texas and West Virginia. Ed DeSeve, a White House adviser on the stimulus, said there are "no special regulations" that cause stimulus money to get to some states faster than others.

Stimulus fraud watchers gathered Wednesday in San Francisco for a “show of force,” the San Francisco Chronicle reports. FBI agents, auditors, district attorneys and others gathered at the behest of the state inspector general, Laura Chick, who warned potential stim crooks that "if you are thinking of messing with these precious dollars, know that we will find you and bring you to justice." Chick estimated that as much as 10 percent of stimulus funds could be lost to fraud.

Bill Clinton is getting some stimulus dollars — Canadian stimulus dollars, that is. The Toronto Globe and Mail reports that the Canadian government is using federal stimulus dollars to help pay Clinton for a speaking engagement on Aug. 29. The report did not say how much of Clinton's fee, which averages $175,000 per speech, will be paid by the government.