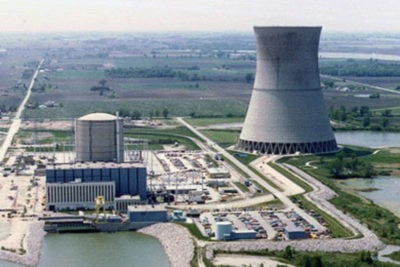 In the fall of 2001, inspectors with the Nuclear Regulatory Commission were so concerned about possible corrosion at Ohio’s Davis Besse Nuclear Power Station that they prepared an emergency order to shut it down for inspection. But, according to a report from the NRC inspector general, senior officials at the agency held off – in part because they did not want to hurt the plant’s bottom line.

When workers finally checked the reactor in February of 2002, they made an astonishing finding: Corrosive fluid from overhead pipes had eaten a football-sized hole in the reactor vessel’s steel side. The only thing preventing a leak of radioactive coolant was a pencil-thin layer of stainless steel.

The Davis Besse incident has resurfaced in the wake of the ongoing nuclear crisis at Japan’s Fukushima Daiichi plant. Stories recounting close ties between Japanese nuclear regulators and utilities there have reinvigorated critics who say the NRC has not been an aggressive enough U.S. watchdog.

The NRC says that is not the case, and commission Chairman Gregory Jaczko defended the agency’s independence and professionalism. “I have a great staff who are dedicated to public health and safety, and people who interact with this agency, they know that and they see that,” he said in an interview.

Critics of the NRC say the problem at Davis Besse, 20 miles southeast of Toledo, is a prime example of the agency’s deference to industry. The inspector general concluded that a conflict between the NRC’s twin goals of inspecting the plant to protect public safety and a desire to “reduce unnecessary regulatory burden” on the owner led to the delay in finding the gaping hole.

In 2003, then NRC’s Chairman Richard Meserve disputed the inspector general’s report, which found that the agency’s decision on Davis Besse “was driven in large part by a desire to lessen the financial impact” on the plant’s owner. Meserve said the NRC had adequate technical grounds for the delay.

The agency insists that it vigilantly watches operations at 104 commercial reactors and frequently issues violations to nuclear companies that step out of line. Since 2001, the agency has averaged about 120 significant enforcement actions a year at power plants and other nuclear facilities it oversees.

While the Davis Besse case focuses on singular allegations of influence, critics say the industry routinely exercises its muscle in a more pervasive way: through contributions to NRC regulatory guides that advise nuclear companies about how to best follow the agency’s rules.

Large parts of the guides, issued by NRC, incorporate or endorse material written by the industry’s trade group, the Nuclear Energy Institute. The guides – containing detailed technical procedures and reference materials – are a key part of NRC’s oversight. They provide the nuts and bolts advice that nuclear operators follow to stay in compliance but often refer to even more detailed industry guides.

The NRC’s guide on fatigue, for example, details how many hours employees in key jobs can work, how to respond when a worker is too tired, and how many days off employees in certain jobs need. It officially incorporates, with a few exceptions, another 60-page guide compiled by the industry group.

In an e-mail, Thomas Kauffman, a spokesman for NEI, passed along responses to ProPublica’s questions from the trade group’s director of engineering, John Butler. “NRC endorsement, with or without exceptions, of industry guidance is a common practice,” Butler said.

Some examples from a list the trade group provided to ProPublica:

The NEI said its role in contributing to NRC’s guides does not mean the nuclear industry has too much influence. Kauffman said the NRC has final say on what NEI adds and frequently makes changes.

“They review them completely,” Kauffman said. “It is one thing to draft something and put it out there; it is quite another for the NRC to decide to accept it.”

NRC spokesman Eliot Brenner said in an e-mail that the NEI is not the sole source of information in agency regulatory guides and that NRC accepts comment from a broad array of sources.

“If any stakeholder – company, industry organization, individual or public group – backs up a request with appropriate information, the NRC will consider it,” Brenner said. “The NRC regularly denies industry requests that lack proper support, and we’ve taken properly supported rulemaking requests from non-industry sources on many occasions.”

“The NRC is the final arbiter of what becomes a regulation,” he said, “with safety the total focus of our effort.”

But others said the reliance on the industry creates a potential conflict of interest.

Jim Riccio, who follows nuclear issues for Greenpeace, said that allowing the NEI to play such a large role means the industry can shape much of what nuclear companies are required to do.

Riccio said NRC’s precursor agency, the Atomic Energy Commission, was disbanded after Congress concluded it had become too concerned with promoting nuclear power instead of regulating safety.

In a 1974 overhaul, development of nuclear energy was transferred elsewhere and protection of the public was given to the NRC, a five-member body whose members are appointed by the president.

Riccio asserted that over the years, NRC has become more accommodating to the industry.

“The problem with inviting the industry in is that they tend to dominate the process,” he said. “The NRC has a problem distinguishing between the public they serve and the industry they regulate. “