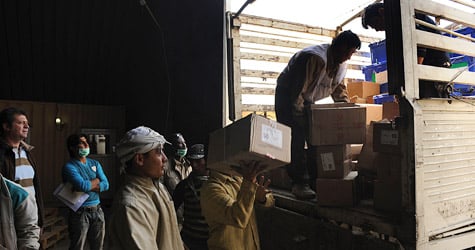 The United Nations cannot account for tens of millions of dollars provided to the troubled Afghan election commission, according to two confidential U.N. audits and interviews with current and former senior diplomats. (Read bothaudits.)

As Afghanistan prepares for a second round of national voting, the documents and interviews paint the fullest picture to date of the finances of the election commission, which has been accused of facilitating election fraud and operating ghost polling places. The new disclosures also deepen the questions about the U.N.'s oversight of money provided by the United States and other nations to ensure a fair election in Afghanistan.

"Everybody kept sending money" to the elections commission, said Peter Galbraith, the former deputy chief of the U.N. mission in Afghanistan. "Nobody put the brakes on. U.S. taxpayers spent hundreds of millions of dollars on a fraudulent election." Galbraith, a deputy to the senior U.N. official in Afghanistan, was fired last month after protesting fraud in the elections.

The audits come as President Barack Obama is struggling to craft a war policy for Afghanistan that would establish a stable government in a country with few democratic traditions. Senior aides have made clear that Obama will not commit to sending additional troops until there is a legitimately elected government in Kabul. On Wednesday, insurgents stormed a housing compound primarily occupied by U.N. election officials, killing eight people, including two election workers.

Afghanistan's Independent Election Commission initially reported that President Hamid Karzai had won the majority of votes in the August election. A recount was ordered after another U.N.-backed panel uncovered evidence of widespread fraud. After weeks of prodding from the Obama administration, Karzai agreed last week to a runoff.

The U.N. audit reports, which are near completion but still in draft form, are likely to fuel debate over the Afghanistan election commission's ability to carry out the new round of voting. Karzai's challenger, Abdullah Abdullah, has suggested he may boycott the elections unless Karzai dismisses the chairman and two other commissioners.

In interviews, senior U.S. and U.N. officials said that U.N. leaders had ignored warnings as far back as 2007 that the election commission was a pro-Karzai body with few internal controls.

Another top official in the U.N.'s Afghanistan mission, Robert Watkins, acknowledged in an interview that some commission employees had contributed to the fraud in the first round of voting.

"It's clear that some of the people" working for the commission at the polling centers "were complicit in fraud," Watkins said. "Some of the staff hired were not working in the best interests of impartial elections."

But Watkins said the United Nations is working to improve the commission's performance in the runoff. He said the U.N. planned to slash the number of poll workers and blackball any that may have been implicated in fraud in the August elections.

As of April 2009, the U.N. had spent $72.4 million supporting the commission, with $56.7 million of that coming from the U.S. Agency for International Development, the audit said. Total election costs are now estimated at greater than $300 million, with the U.S. providing a third to half the total funding, according to one senior U.N. official familiar with the elections process.

The draft audit reports indicate that as many as one-third of payroll requests from the Afghan commission to the United Nations included "discrepancies," such as incorrect names or amounts.

In another instance, the U.N. Development Program paid $6.8 million for transportation services in areas where no U.N. officials were present. Auditors found that the development agency had "inadequate controls" over U.S. taxpayer money used to fund the commission.

A UNDP spokesman, Stephane Dujarric, said he could not comment on specific findings in the audits, since they were still in draft form. However, he said the agency strived to rigorously account for spending despite operating in a war zone.

"The insecurity, the lack of infrastructure, the pervasive corruption and harshness of the terrain make the implementation of any project extremely difficult," Dujarric said. "That being said, those challenges in no way absolve us of constantly doing our utmost to ensure that monies given to us by donors are properly spent and accounted for."

Watkins acknowledged that the U.N. had concerns about the commission as elections approached. The development agency works closely with the commission, paying salaries, buying supplies and handling logistical questions.

However, he said no evidence had surfaced that money flowing to the commission had been used to buy votes or bribe officials. "The indications were that (the commission) did not have sufficient controls in place. I can't jump to the conclusion that the money was misappropriated."

Watkins said he was "much more confident" about the commission's spending practices after the U.N. tightened controls this summer. "I think we have a good partner" in the commission, Watkins said.

The U.N., he said, had suggested cutting the number of polling workers from 160,000 to 60,000 for the runoff election, in part to ensure better-trained workers. The smaller work force also reflects an effort by the U.N. to have fewer polling stations and fewer workers per station. He also said the U.N. would blackball at least 200 workers who had been linked to voting centers where fraud was alleged.

In public statements, commission officials have not yet committed to reducing staff or polling stations. A commission spokesman did not return a request for comment.

The confidential reports are being written by two U.N. audit agencies to examine charges that the U.N. had failed to safeguard $263 million in money from the U.S. Agency for International Development that was channeled through the development agency to fund the elections and rebuilding projects. USAID money accounted for about 40 percent of U.N. spending in Afghanistan between 2003 and 2009, the audits said.

Overall, the audits found that U.N. monitoring of U.S. taxpayer funds was "seriously inadequate." Auditors could not find receipts, work plans or documentation to back up costs for projects such as roads and bridges. U.N. officials did not conduct site visits to confirm work and did not prepare financial reports for donor countries like the U.S., the audits found.

The main focus for criticism, however, was U.N. support of the election commission, a seven-member board whose members were appointed by Karzai. Using U.S. money, the U.N. development agency paid for commission salaries, helped contract out services and was supposed to train the commission to carry out its election responsibilities independently.

But the audit found that the development agency project was "not well managed" and contained several "weaknesses."

Auditors found that the U.N. development agency had sent more than $7 million to the elections commission -- including cash payments to temporary staff -- without proof of expenditures.

The auditors made no findings as to whether the money that flowed to the commission was implicated in the fraudulent vote counting. Auditors said that they had hired an outside audit firm to conduct a more detailed review.

Harry Edwards, a spokesman for USAID, said the agency had not seen the audits and could not comment.

Galbraith cautioned against drawing conclusions as to whether U.N. oversight of financial issues played a significant role in the voting fraud. He blamed Kai Eide, the Norwegian diplomat who is the senior U.N. official in Afghanistan and his former boss, as well as himself, for not flagging problems with the commission earlier. Eide has denied any effort to cover up evidence of fraud in the elections process.

"The flaw was not a management flaw," Galbraith said. "It was a political flaw to put all this money into an institution that was not as advertised. It was a political judgment not to say, 'if you want us to pay for these elections, then we insist you do them in this way.'"

One former U.N. official with knowledge of the elections process said that the allegations of financial mismanagement were not surprising. The official, who did not want to be named because of the sensitivity of the topic, said that neither the U.N. nor the elections commission had a well-developed accounting program.

The commission "had no control over their financial management side," the U.N. official said. "It was chaotic. There was no outside oversight."

Instead, this official said that senior U.N. and U.S. diplomats pushed for the U.N. development agency to "deliver" the election by working with the elections commission -- despite warnings that the commission was not truly independent.

"Nobody was paying attention. Nobody wanted to do anything about" the problems at the election commission, the official said.

The draft audits are the latest sign of problems with U.N. oversight of U.S. money in Afghanistan. Last year, the USAID inspector general issued a report charging that the U.N. had failed to complete U.S.-funded rebuilding projects and stonewalled an investigation into the $25.6 million program. USAID's inspector general continues to investigate Gary K. Helseth, who headed the U.N. Office for Project Services between 2003 and 2006, in connection with the rebuilding program, a spokeswoman said. Helseth's attorney did not return a request for comment.

The U.N. audits, however, also criticized the work of USAID's inspector general. The USAID report, for instance, contained allegations that Mark Oviatt, the senior UNOPS official who replaced Helseth, had used USAID money to renovate a guest house for himself. Instead, the audit found that the U.N. had paid $35,000 out of its own pocket to conduct the renovation. Oviatt declined comment.

The U.N. audits also chastised the inspector general's report for attempting to shirk USAID's responsibility for problems with the development projects.

Donna Dinkler, a spokeswoman for USAID's inspector general, said, "They can say what they want, but we stand by our findings."