A U.S. Department of Labor report released today details the bleak fate facing the nation’s injured workers, noting that those hurt on the job are at “great risk of falling into poverty” because state workers’ compensation systems are failing to provide them with adequate benefits.

The report lays the groundwork for renewed federal oversight of state workers’ comp programs, providing a detailed history of the government’s past efforts to step in when states fell short. Sen. Sherrod Brown, D-Ohio, said in a statement Tuesday night that he was drafting legislation “to address many of the troubling findings laid out in this report” and hoped to advance it in the next Congress.

The 43-page report was prompted by a letter last fall from 10 prominent lawmakers, including Brown, urging more action to protect injured workers following a ProPublica and NPR series on workers’ comp. The stories found that since 2003, more than 30 states had changed their laws, causing some workers to lose their homes, or be denied surgeries or prosthetic devices their doctors recommended.

The Labor Department’s conclusions echo ProPublica and NPR’s findings that states have decreased benefits, created hurdles to medical care, raised the burden of proof to qualify for help and shifted costs to public programs, such as Social Security Disability Insurance.

The Occupational Safety and Health Administration, a division of the Labor Department, made similar findings last year. But Wednesday’s report underscores the prominence of the issue, as departmental investigations are typically reserved for White House priorities, such as increasing the minimum wage and guaranteeing paid family leave.

The report provides a roadmap of potential actions, but stops short of new policy recommendations in what appears to be a tacit nod to the fact that President Obama’s term is waning and substantial changes must wait for another administration. Labor Secretary Thomas Perez, who was shortlisted as a potential vice presidential candidate, is expected to hold a top job if Hillary Clinton wins the election next month.

“With this report, we’re sounding an alarm bell,” Perez said in an interview Tuesday. “A critical part of the safety net is being both attacked and eroded in no small measure because there are no federal minimum standards for workers’ compensation.”

“I hope that Congress will step up,” he added. “We have to fix this system.”

Workers’ comp dates back more than century, with each state having its own system of benefits, insurance rules and courts. Typically, when a worker is injured, employers pay their medical bills, a portion of their lost wages and compensation for any permanent disabilities. In exchange for prompt and certain benefits, workers are barred from suing their employers.

But as ProPublica and NPR found, the benefits can vary drastically, with compensation for an amputated arm ranging from $45,000 to $740,000, even in neighboring states.

The Labor Department report details how states have changed their laws largely in an effort to reduce business costs as they compete for new corporate headquarters, factories and warehouses — a trend the report calls a “race to the bottom.”

It calls for policymakers to explore how to prevent the costs of workplace injuries and illnesses from being transferred to public programs, how to increase the sharing of injury data between insurers and public health researchers, and how to develop programs that help disabled workers return to the job.

Most significantly, it floats the idea of increasing federal oversight of state workers’ comp programs, which could include the appointment of a national commission, federal tracking of state laws and the establishment of minimum standards and penalties if states fail to meet them.

A presidential commission in 1972 came up with 19 guidelines for states to improve their workers’ comp systems and recommended that Congress mandate them if states didn’t act. Many states did, but as political winds shifted in the early 1980s, the threat of federal intervention passed.

The suggestion of increased federal involvement has set off alarm bells in the insurance and employer communities.

“Federal requirements imposed on a national basis would be inconsistent with the state workers’ compensation system, which has been in place for more than 100 years without federal oversight,” wrote Douglas Holmes in a recent blog post. Holmes is president of UWC, a business lobby group focused on unemployment and workers’ comp.

But in its report, the Labor Department notes that as far back as 1939, the agency considered setting guiding principles for workers’ comp as part of its mission. President Harry Truman spoke of promoting standards for state programs while President Dwight D. Eisenhower’s labor secretary sponsored the drafting of model workers’ comp laws. 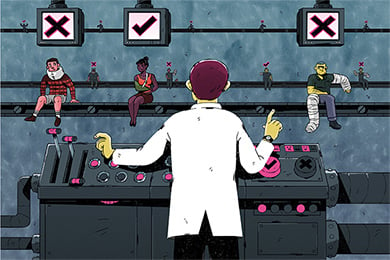 One Texas lawyer is helping companies opt out of workers’ compensation and write their own rules. What does it mean for injured workers? Read the story.

Such involvement continued through the Ford and Carter administrations but was curtailed during the Reagan era. The Labor Department continued to track states’ compliance with the 1972 commission guidelines until 2004, when budget cuts ended the program.

Courts and lawmakers in several states have moved to restore workers’ comp protections since the ProPublica and NPR series published in 2015. Top courts in Florida and Oklahoma have overturned a number of business-friendly reforms highlighted in the series, including a two-year cap on wage benefits and a provision that allowed Oklahoma businesses to opt out of workers’ comp and write their own plans to care for injured employees. This summer, New Mexico’s Supreme Court granted farmworkers the right to workers’ comp for the first time in 100 years.

In California, the governor last week signed a bill that will reduce the roadblocks for workers to get medical care. And the state’s workers’ comp bureau is in the final stages of writing a new regulation that would allow more severely injured workers to qualify for home health care.

Last year, ProPublica profiled workers who had their home health aides taken away after a new law allowed insurance companies to reevaluate cases based on a more restrictive regulation.