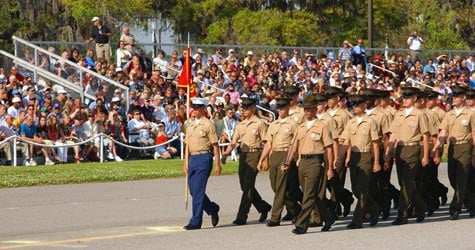 During the years he dueled terrorists overseas as a top operative for the CIA, Charles S. Faddis came to see the world through the eyes of the enemy.

Working in Iraq, South Asia and other hotspots, he cased streetscapes like a terrorist, identifying potential targets, probing for vulnerabilities. When he returned home he found himself looking through the same instinctive lens, whether riding Amtrak or attending a U.S. Marine Corps graduation. 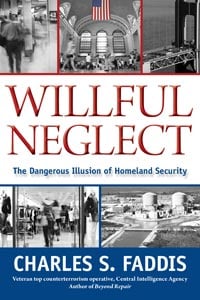 What he saw -- despite a vast campaign to fortify the United States after the Sept. 11 attacks -- scared him. In fact, he says it scared him so much that he has written a new book, Willful Neglect: The Dangerous Illusion of Homeland Security.

"Amazingly...as you tour this nation and examine the prime targets that beg to be defended from terrorist attack, what you find, eight years later, is that virtually nothing meaningful has been done," Faddis writes. "True, large new bureaucracies have been created and shiny, new office buildings constructed, but in terms of concrete measures which will stand in the way of determined, evil men, there is very, very little."

Faddis backs that startling claim with his credentials as a counterterror warrior. He retired in 2008 after 20 years at the CIA, serving as a station chief in the Middle East and leading a Washington-based program to prevent terrorists from obtaining weapons of mass destruction. He is also the author of last year's Beyond Repair, a tough critique of the CIA's internal troubles.

"I didn't want people saying it's not fair because you were a senior [antiterror operative] in the CIA," the solemn, silver-bearded Faddis explained during an interview at a burger joint near the Beltway. "I was just Joe Blow. I didn't do clandestine stuff. If somebody turned me around, I left."

His findings are a catalog of danger and negligence. He says he encountered systemically weak, outmoded defenses and poorly trained personnel more apt at discouraging burglars than stopping suicide terror teams.

A spokesperson for the Department of Homeland Security declined to comment on the specifics of the book. The spokesperson referred ProPublica to the department Web site, which lists the programs it has developed to protect the nation's infrastructure during the past seven years. The department works closely with private companies on security strategy, the Web site says, because corporations own and operate about 85 percent of the nation's critical infrastructure.

When Faddis visited the Army's sprawling Fort Myer in northern Virginia, two "surly, lazy" guards conducted an "absolute minimum" examination of his car, he writes. The lackluster search was typical of his experiences: During the months he spent casing facilities, security guards turned him away only once after deciding he had no business being in the facility, he writes. He finds it incredible that military bases, chemical plants and other facilities lack barriers against car bombs and don't aggressively inspect cars for concealed explosives -- both standard practice at embassies around the world.

At a suburban office park in Maryland, he discovered that a biological laboratory full of deadly viruses didn't have guards, gates, fences or security cameras likes those he found at a nearby bank. His book reviews a litany of security flaws in the bioweapons research world revealed by the 2001 anthrax attacks, which were allegedly the work of a disgruntled scientist, and criticizes the dramatic increase in the number of labs handling lethal substances.

At the iconic Marine Corps academy in Parris Island, S.C., Faddis watched sentries fail to search vehicles or effectively screen visitors to his son's graduation ceremony. The lack of checkpoints could have enabled a car bomber to drive onto the parade ground, the book says.

When Faddis' book was released in February, the reaction included accolades from nuclear safety watchdogs and from a security executive who met with Faddis to tell him the critique had been helpful. 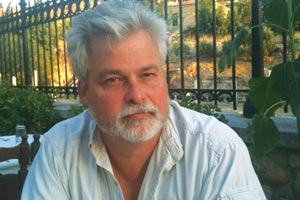 But the book has drawn criticism as well. Responding to a Faddis op-ed piece on CNN's Web site, a nuclear industry advocate said Faddis had ignored efforts to expand and upgrade the industry's security since 2001. Faddis "exposed his lack of understanding of...security training requirements," wrote Tony Pietrangelo of the Nuclear Energy Institute, an industry group, last month.

Faddis acknowledges that the government has spent time and money on measures such as creating the 225,000-employee Department of Homeland Security and beefing up security at airports, borders and federal buildings. Nonetheless, he accuses the government and corporations of often failing to match rhetoric about terrorism with substance in other areas.

He criticizes what he calls skewed federal budget priorities, including a new $3.4 billion Department of Homeland Security headquarters being built in Washington and millions spent on dubious "homeland security" measures such as surveillance cameras in an Alaskan fishing village and fire hydrants in Atlanta. Meanwhile, he asserts, "long lines of railcars packed with the most dangerous substances on earth sit unattended all over our nation."

He charges that corporations skimp on safety while insisting on building high-risk facilities in densely populated areas that invite attack. Citing proposed liquid natural gas plants in the Baltimore and Washington areas, he describes how bombings could unleash a combined fireball and toxic cloud spreading for miles.

"If eight years after 9/11 we are going to build a liquid natural gas plant on the doorstep of the nation's capital, I can't believe we are serious about doing homeland security," he said.

As part of his research, Faddis met with Imani Kazana, a community acitivist who has fought a long battle against building such a liquid natural gas plant in the Maryland suburbs of Washington. The site already houses an underground complex of pipes of the Washington Gas Company in her middle-class neighborhood less than five miles from the U.S. Capitol.

"Mr. Faddis has confirmed our fears," Kazana said in an interview with ProPublica. "It doesn't take a brain surgeon to see how vulnerable it could be. A rocket-propelled grenade could blast it away. The gas cloud could find a spark and we're history."

Faddis' warning comes during an unprecedented string of cases involving terrorists in America. In one, an Afghan immigrant trained by al-Qaida admitted that he planned to bomb the New York subway system. In another, a Chicago businessman confessed to acting as a traveling scout for the 2008 attacks in Mumbai that killed 164 people.

In the interview, Faddis described Mumbai with clinical understatement as "a pretty squared-away op." He sees the meticulously planned commando-style attack by Pakistani militants as a model for future strikes.

Another worrisome sign of potential vulnerability: In March, police in Yemen arrested an American accused of being a Qaida militant; they say he later killed a hospital security guard. Authorities have learned that the suspect, who is from New Jersey, worked as a laborer at six nuclear plants on the East Coast from 2002 to 2008.

Faddis said he was careful not to create a handbook for aspiring terrorists in search of ideas, targets and strategies. He omitted details including names and locations of several potential targets. And before publication, he sent advance chapters to security officials at the places he explored.

"That was a big factor I wrestled with," he said. "I felt comfortable when I was done that I had struck the proper balance. It's not a primer for bad guys. So much of that information is out there already."

His prescriptions tend to be simple: better training for security guards, installation of meaningful defenses against car bombs, stepped-up deployment of police dogs in rail hubs to dissuade would-be bombers hoping to replicate the Madrid and London attacks on U.S. soil.

"They don't all have to be bomb-sniffing dogs," he said. "But if they are out there, they disrupt. They ought to be out there on the platform, a presence. And that's not expensive. It's relatively cheap."

Faddis' exasperation grows from his view that the American security apparatus favors budgets and bureaucracy over agility and common sense, a critique by European and Israeli experts as well. Despite the noisy political debate about the dangers of terrorism and which politicians are doing more to fight it, he worries about a seeming inability to zero in on what really matters.

"It boggles me that people don't focus more on this," he said. "We have to get out of the mode of creating bureaucracies to stop the attack that already happened."