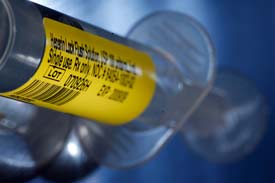 The Food and Drug Administration’s failure to stop contaminated syringes from reaching the market should be investigated by the agency’s inspector general, a watchdog group said Monday.

The call by the Project on Government Oversight, or POGO, followed publication last weekend of a ProPublica and Chicago Tribune  report that said the FDA missed chances to act before a contaminated lot of 74,000 syringes was shipped. Authorities connected four deaths and 162 illnesses to the syringes.

"It’s clear that the FDA fell down on the job despite many strong warnings that the company, AM2PAT, could not be trusted," said Dr. Ned Feder, staff scientist and co-author of the letter sent to the FDA and Health and Human Services Inspector General office.

Review of the 2007 case would shine "light on the institutional weaknesses at the FDA that led to regulatory failures in other episodes that are more complicated and more difficult to investigate," he said.

A spokeswoman for the inspector general’s office at the Department of Health and Human Services, the FDA’s parent, declined comment on a possible investigation. Feder and POGO previously have criticized the agency for relaxing oversight of medical devices and abandoning certain types of inspections.

Margaret Hamburg, the FDA’s new commissioner, spoke out on Saturday, saying she wants to make aggressive enforcement a top priority.

A congressional subcommittee, meanwhile, has announced a June 18 hearing on the topic of medical device safety, a class that includes the pre-filled syringes. The House Energy and Commerce Health Subcommittee has called the meeting but has not yet disclosed who will testify.

The ProPublica and Tribune investigation reported that a distributor voluntarily began recalling 1.3 million AM2PAT syringes on July 30, 2007, after reports of contamination.

The recall "should" have triggered a full inspection of the company’s plant, according to the FDA operations manual. But the agency never launched the inspection, a spokeswoman said. She said FDA no longer followed the policy because of staff shortages.

A few weeks after the recall, AM2PAT sent out syringes contaminated with bacteria. Many patients who used them suffered bloodstream infections with nausea, vomiting and high fevers. Complications led to at least one patient suffering brain damage and another losing some hearing, lawsuits claim.

A 2-year-old girl from Texas had recovered from a double lung transplant . She contracted a blood infection after her father administered heparin to her from an AM2PAT syringe, medical records show. Weakened, the girl died three months later of complications, according to the family’s lawsuit.

In the letter, Feder said the FDA has taken a collegial and tolerant stance toward manufacturers when it should be "arms length, formal, and peremptory."

"Too often the FDA regards itself as a partner of manufacturers rather than a regulator," he said in an interview.

Data compiled in the 2007 report "FDA Science and Mission at Risk" show a long-range drop in enforcement actions by the agency.

FDA seizures of dangerous products before they hit the marketplace are at one-tenth the number of 15 years ago, data in the report show. The number of court orders sought by the agency to shut down troubled plants, fell by more than 40 percent during the same time.