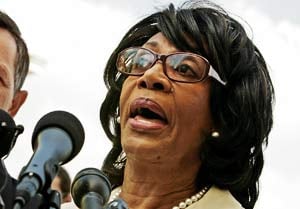 Since we wrote earlier today about OneUnited, the little minority-owned Massachusetts bank with some big friends, there’s some more to tell. The New York Timesreports that Rep. Maxine Waters (D-CA), whose husband owned more than $250,000 worth of stock in the bank as recently as last year, helped the bank seek federal funds not once, but twice, and the first time came in September, before the $700 billion bailout bill had even been passed.

The September request (they wanted $50 million) appears to have shocked Treasury employees. One told the Times, "I don’t remember that ever happening before." Waters arranged for a meeting that was ostensibly to deal with troubles at minority-owned banks but turned out to be a pitch for OneUnited.

Waters refused to answer the Times’ questions, as she did the Wall StreetJournal’s. The details cast further doubt on Waters’ claim in a January interview with the Journal that she had no idea the bank had gotten a $12 million piece of the bailout. According to the Times, she’d called the Treasury in early December to make sure OneUnited was getting the attention it deserved. The bank got bailout funds later that month.

Both the Treasury and OneUnited’s regulator, the FDIC, deny that Waters’ intervention had anything to do with Treasury’s ultimate decision. OneUnited’s CEO, speaking to the Times, goes one step further. Waters "did not really do anything," he says:

Ms. Waters is an important advocate for minorities and minority issues and an indispensable part of Los Angeles communities. But we derived no benefit whatsoever from any activity related to her. And she did not really do anything. There is nothing that she did that impacted the process.