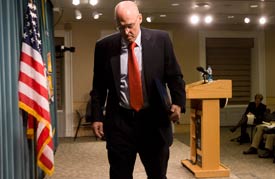 The Treasury Department shifted gears this week, abandoning its plan to purchase troubled assets and widening bailout eligibility to credit card, auto and student loan companies. Nobody was too surprised by the announcement, but some say that it has dented Paulson’s credibility while others warn that the loosened restrictions on eligibility may hurt taxpayers in the end. The Treasury’s first installment of bailout bucks is dwindling fast, and lobbyists are elbowing each other for the crumbs.

The Wall Street Journal looked at the government’s herky-jerky response to the crisis and reported that despite appearances, Henry Paulson and Ben Bernanke have often disagreed on the best approach to mitigate the crisis. The Washington Post reports that unnoticed during its attempts at damage control, the Treasury quietly tweaked a 20-year-old tax rule, potentially giving banks as much as a $140 billion windfall.

A struggling Fannie Mae posted huge third quarter losses this week and indicated that it may need more than the $100 billion pledged by the Treasury. Freddie Mac also posted big losses and asked for its first round of federal cash: $14 billion.

Finally, despite earlier pledges of transparency, the Federal Reserve is refusing to disclose the banks to which it is giving nearly $2 trillion in emergency loans, prompting a FOIA lawsuit from Bloomberg News. And Congress and the White House still have not hired legally mandated watchdogs to oversee the bailout.

The government overhauled the terms of AIG’s loan on Monday, bringing the grand total to $152.5 billion. That same day, the struggling company reported massive third quarter losses, prompting an economist to complain that the government was "keeping the zombie alive." The Wall Street Journal reports that these revised terms are a huge boon to banks that bought protection on their mortgage-backed securities from AIG.

Also on Monday,ABC News reported that AIG had hosted – and tried to hide – another luxurious retreat for its executives. Today AIG announced that it was going to dole out $503 million in deferred compensation to its executives.

Meanwhile transit agencies have been left in a lurch after AIG’s collapse left them owing millions to companies they had entered into tax-shelter deals with.

Human rights groups are abuzz with the news that Obama advisers are already drafting plans to close Gitmo and prosecute the detainees in U.S. courts. McClatchy reports that the approximately 100 Yemeni detainees – some of whom are innocent, their lawyers say – will pose an obstacle to closing the prison because Yemen has refused to imprison them without charges and the U.S. refuses to turn over its evidence, say Yemeni officials.

Meanwhile some Bush officials – especially in the State Department – are pushing for a revision of its harsh interrogation policies before the term ends.

Finally, given that Sen. Ted Stevens looks primed to lose his re-election bid, we’ve taken "Alaska!" off our Scandal Watch.