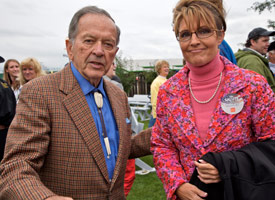 Senator and convicted felon Ted Stevens (R-AK) is holding on to a slim lead in his bid for re-election. As we noted a few weeks ago, there’s no law barring felons from serving in the Senate. But the Senate can expel one of their own, with a two-thirds vote of the whole Senate. And if Stevens really is re-elected, the Senate leadership of both parties have made it clear that whatever the people of Alaska want, Stevens won’t be welcome back in the chamber:

Senate Majority Leader Harry Reid, a Nevada Democrat, said there's no doubt the Senate would kick out Stevens. Sen. Mitch McConnell of Kentucky, the Senate Republican minority leader, has said Stevens should resign and that "if he is re-elected and the felony charge stands through the appeals process, there is zero chance that a senator with a felony conviction would not be expelled from the Senate."

Update: Itâs important worth noting, as we do here, that McConnell does not support immediately booting Stevens from the Senate. Waiting for the appeals process to reach a final conclusion could mean waiting years.

So what happens if the Senate gives Stevens the boot? Under Alaska state law, the current governor—perhaps you remember her—would appoint a temporary replacement. Then a special election would be held to choose a senator to serve out the remainder of Stevens’ six-year term. With no primary election in the near future, a special election would need to be held within 90 days of Stevens leaving office.

Could Stevens actually run again via the special election? After all, Alaska’s voters and Senate leaders could theoretically end up playing a game of ping-pong—where Alaska votes him in, the Senate expels him and then Alaska votes him back in. We’re looking into it.

According to Betty Koed, assistant Senate historian at the Senate Historical Office, there are no constitutional barriers or Senate rules preventing him from doing so, but there may be a state law. We’re waiting to hear back from Alaska’s Division of Elections.