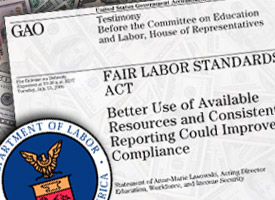 This has many experts worried, especially now that the federal minimum wage is set to rise 70 cents to $6.55 an hour starting Thursday.

The Wage and Hour Division of the Labor Department, which is supposed to protect workers from substandard pay and working conditions, pursued about 30,000 enforcement actions in 2000, one-third fewer actions than the 47,000 the division followed in 1997, according to one GAO report. The report also found that the number of investigators in the office dropped by 20 percent over the same period. And the office, the GAO noted, is responding to more complaints over the phone as opposed to going out into the field.

The department "may not be addressing the needs of workers most vulnerable to [Fair Labor Standards Act] violations," the report concluded.

"If there's no enforcement of that minimum wage floor, [the increase] doesn't mean anything," said Cathy Ruckelshaus, litigation director for the National Employment Law Project, a national nonprofit that advocates for low-wage workers.

The lack of enforcement also hurts law-abiding employers who must then compete against companies that keep costs down by underpaying workers, she added.

The House Education and Labor Committee held a hearing last week to probe the lack of enforcement. Gregory Kutz, the GAO's managing director of forensic audits and special investigations, testified at the hearing and highlighted several specific cases, including garment workers whose employer refused to pay legal wages because they weren't U.S. citizens.

With the federal minimum wage increasing, advocates are concerned about the potential for an increase in wage violations.

"Every time there's an increase in the minimum wage, there are employers who aren't in compliance," said Kim Bobo, executive director of Interfaith Worker Justice, who also testified at the house hearing. "So it increases the workload for the wage and hour division. It puts them in an even greater crisis."

Analysts estimate that nearly six million workers will eventually get a mandated raise thanks to the revised minimum wage. That is, assuming employers actually pay it.

"Given its record, there is some concern that WHD will be lackluster in enforcing the upcoming minimum wage increase," Congressman Phil Hare (D-IL), who is also on the committee, told us via a statement. "Congress will be keeping a close eye on this and stepping up pressure on the Department of Labor to hold employers accountable."

The Department of Labor hasn't yet responded to our requests for comment. If and when they respond, we'll post an update.