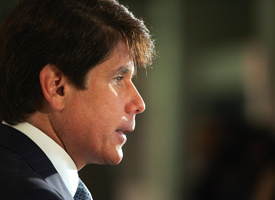 The FBI's arrest today of Illinois Gov. Rod Blagojevich has brought a new figure into our political lexicon: "Senate Candidate 5."

The FBI recorded Blagojevich last week saying to an adviser that "Candidate 5" might raise money for Blagojevich and even give him "some (money) up front, maybe" in exchange for being appointed to replace Obama, according to today's criminal complaint (PDF) filed by the United States Attorney's office in Chicago.

Blagojevich has the sole power to appoint Obama's replacement under the state constitution. Blagojevich allegedly analogized this power to that of a sports agent shopping a potential free agent to the highest bidder, telling an adviser, “I've got this thing and it's fucking golden...I'm just not giving it up for fuckin' nothing."

Indeed, Blagojevich allegedly claimed in a recorded conversation on Oct. 31 that "an emissary" of Senate Candidate 5 approached him with an offer that was hard to refuse: "We were approached 'pay to play,'" the governor said. "That, you know, he'd raise 500 grand. Then the other guy would raise a million, if I made him (Senate Candidate 5) a Senator."

Of course, this account comes only from Blagojevich, whose credibility is debatable.

Regardless, it seems worthwhile to explore who this mysterious Candidate 5 could be.

ProPublica has previously noted that top candidates include U.S. Rep. Luis Gutierrez (D-IL) and U.S. Rep. Jesse Jackson Jr., another Democrat from Chicago. They both have openly coveted the position. Just yesterday, Jackson interviewed with Blagojevich for the position. Jackson left the meeting saying, "I am convinced that the governor has a very thoughtful process that he has put in place and is wrestling and weighing a number of issues in this enormous decision that he has to make."

Today, Jackson said in a statement that he is "deeply concerned that this process may have been tainted."

The government's complaint provides only veiled hints as to this Senate Candidate 5's identity. And U.S. Attorney Patrick Fitzgerald cautioned against speculation, noting that only Blagojevich and his chief of staff have been charged with wrongdoing.

Still, we can't help but wonder. So let's review the government's hints:


Blagojevich allegedly warned the fundraiser, "You gotta be careful how you express that and assume everybody's listening, the whole world is listening. You hear me?"

If readers flag any other hints in the complaint or have insight into the identity of Candidate 5, feel free to send us your thoughts and ideas. We've put calls into Jackson, Gutierrez and Turner and will report back if and when we hear back.