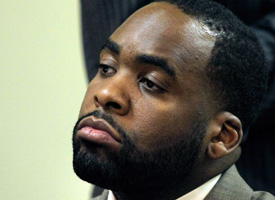 News broke earlier today that Detroit Mayor Kwame Kilpatrick was jailed after he violated the conditions of his bail by making a business trip to Windsor, the nearby Canadian city. His lawyer immediately tried to appeal the decision, but could only get a hearing for 9 a.m. tomorrow, meaning that at the very least, Kilpatrick will be spending the night behind bars. The sheriff said that the mayor, after being searched and given toiletries, was put in a special cell for high-profile prisoners.

It’s a remarkable development, but maybe not quite so remarkable considering what Detroit has been through this year: a mayor indicted for perjury and obstruction of justice, who has refused to step down, prompting other investigations and attempts to unseat him. There hasn't been a dull moment. Late last month, Kilpatrick allegedly shoved a detective who was trying to serve a subpoena; the state attorney general will announce tomorrow whether he’ll file charges.

For the moment, Detroit's mayor is unavailable, creating "uncertainty," as the Detroit Newsputs it, as to who exactly is in charge. The deputy mayor is currently serving as the chief of the city’s Water and Sewerage Department, and it's unclear if he'll be called back to fill the breach. We've put in a call to the mayor's office, and we'll let you know if anybody's there to return our call.

5:20 P.M. Update: We have an answer! This afternoon, the mayor's chief of staff held a press conference to announce that everything is under control. From the Detroit Free Press:

Deputy Mayor Kandia Milton, the mayor's chief of staff and long-time friend, said at a 4:30 p.m. news conference that he was speaking on behalf of Kilpatrick.